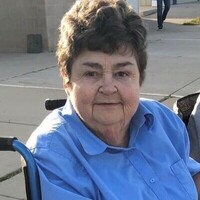 Yvonne “Vonnie” Marie Erivez passed on April 10, 2020 surrounded by family in her home. Vonnie was born on September 30, 1946 in Sidney, MT to Don and Thelma Petrik. Vonnie is the oldest of four sisters, Retta, Sherry, and Pam. She attended school in Sidney and later received her GED in 1995. She attended beauty school in Glasgow, MT, where she met Jerry Foster. They wed in 1966 and from that union they had four children, Shelly, Michael, Kevin, and Jamey. They moved to Bellingham, WA. Vonnie moved to Gillette, WY in 1982 where she met Martine Erivez and they wed on March 26, 1984. They had one child Martine “Marty” Erivez Jr.

Vonnie worked as a waitress, bartender, fish canner, daycare provider, and delivered papers for The Star Tribune and The News Record. She loved all things racing. On most Saturday nights, during the summer, you could find her in the stands cheering on Marty.

Vonnie was diagnosed with cervical cancer in 2008 and went into remission in December of 2010. Vonnie was so proud that she fought and beat cancer and was in remission for 9 years. On February 26, 2020 she was diagnosed with a glioblastoma, an aggressive cancer, in her brain. With the love and support of her family and friends she was able to spend the rest of her time in her home.

Vonnie’s true joy was her family and most importantly her grandchildren and great grandchildren. She was known to most people as “Nanny” because she loved and cared for so many.

Vonnie is preceeded in death by her father Don Petrik, her first grandchild John Michael, and her aunt Sandy Saul. There will be a Celebration of Life be arranged at a later date. Memorials and condolences may be sent in care of Gillette Memorial Chapel 210 West 5th Street, Gillette, WY 82716. Condolences may also be expressed at www.gillettememorialchapel.com

To order memorial trees or send flowers to the family in memory of Yvonne Marie Erivez, please visit our flower store.