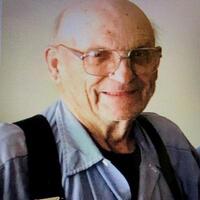 Willie Hertel, 85, of Moorcroft died Saturday, Aug. 15, 2020, at home of cancer. Please join us in a celebration of life at 11 a.m. Friday at Gillette Memorial Chapel with a procession to Mount Pisgah cemetery following the services. We invite everyone to join us at the American Legion, 200 Rockpile Blvd., for a luncheon following services. Willie was born Nov. 1, 1934, in Mobridge, South Dakota, to Fred and Anna (Simerman) Hertel. When he was 1 year old, his mother passed away and he went to live with his father’s cousin, Fred, and his wife, Lydia Hertel, who raised him as their own. Willie grew up on a farm in McLaughlin, South Dakota, where he attended country school for his first six years, finishing school in McLaughlin through the eighth grade. Willie married his soulmate and love of his life for the last 65 years, Bernice (Schaffer) Hertel, on Sept. 11, 1955. Willie and Bernice stayed in McLaughlin while he continued to farm with his parents. During this time, they added six children to their union. In 1978, they moved to Gillette, where he went to work doing construction for a short time until he found his career in plumbing. He worked for the Campbell County School District for 20 years, retiring in 1998. Although he retired from the school district, he continued to do plumbing, working for himself for many years. In 2000, he moved to Moorcroft, where he lived out his retirement years. As we all know Willie, even though he “retired," he stayed plenty busy in his shop tinkering and building many things. As always, if you even mentioned needing something, he was first to volunteer to get the job done whether it was odd jobs or helping friends and family with projects. Willie is survived by his children, Kenneth (Shirley) Hertel of Bullhead, Arizona; Valerie Sweeney (Ron) of Moorcroft; Danny Hertel, Loren (Bonnie) Hertel and Larry (Brenda) Hertel; as well as daughter-in-law, Mame Hertel, all of Gillette; sister, Delanis Jocim; brothers, Martin, Lawrence and Tim Hertel; and half-brother, Delray Hertel; one nephew; three nieces; 15 grandchildren; 30 great-grandchildren; and one great-great-grandchild. He is preceded in death by his parents; son, Gaylen Hertel; seven brothers; and two sisters. Memorials and condolences may be sent in care of Gillette Memorial Chapel, 210 W. Fifth St., Gillette, WY 82716. Condolences may also be expressed at www.gillettememorialchapel.com

To order memorial trees or send flowers to the family in memory of Willie Henry Hertel, please visit our flower store.