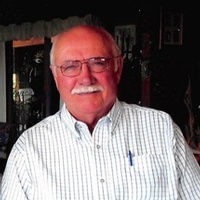 Memorial Service for William E. "Bill" Winland will be held at 1:00 p.m., Thursday, October 25, 2018 at First Presbyterian Church in Gillette, WY with Pastor Susan Reichenberg officiating.  William Earl Winland was born to William Lysle and Dorothy Pauline Winland March 14, 1936, in Gillette, Wyoming. He passed away at age 82, on October 19, 2018 at Campbell County Memorial Hospital. Bill was raised and educated in Gillette, graduated from Campbell County High School in 1955. He went to attend Chadron State College for 3 years before returning home to run the family business, Winland Dairy Service. Later in life he owned and operated Circle B Siding Company. He married Sharon L. Wells November 1, 1959, together they raised 3 children, Calvin, Mark and Starla.  During this time he served in the National Guard, was a member of the Jaycee's, Lions Club International and served as a member and chairman of the Campbell County School Board.  He was a lifelong member of the First Presbyterian Church.  Bill's faith in God was steadfast and guided him throughout his life. Bill was very involved in the Lions Club, serving as District Governor twice and being elected as International Director in 1980.  Bill and Sharon traveled the world serving the Lions Club and was a founding member of the Rocky Mountain Lions Eye Bank. Family was the most important part of his life. He enjoyed camping, hunting, fly fishing and family vacations.  Later in life he enjoyed teaching his grandchildren and great- grandchildren woodworking skills, fishing at the Dalby Memorial Lake and canning. Bill is survived by his wife of 59 years, Sharon Winland; children, Calvin Winland and Starla (Mark) Shelly; Three grandchildren; six great-grandchildren and numerous nieces and nephews. He is preceded in death by his parents; sister, Junea Phillips; and son, Mark Winland. In lieu of flowers the family request that memorials be made in Bill’s name to benefit the Rocky Mountain Lions Eye Bank, 1675 Aurora Ct., F-751 Aurora, Colorado 80045 or Heptner Cancer Center. Memorials and condolences may be sent in care of Gillette Memorial Chapel 210 West 5th Street, Gillette, WY 82716. Condolences may also be expressed at www.gillettememorialchapel.com

To order memorial trees or send flowers to the family in memory of William Earl Winland, please visit our flower store.