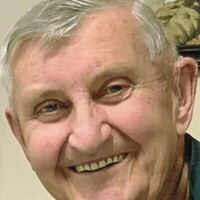 Mass of Christian Burial for William F. Pidgeon will be held at 10:00 a.m., Monday, May 18, 2020 at St. Matthew's Catholic Church with Father Cliff Jacobson officiating; interment to follow at Mt. Pisgah Cemetery. To protect the health and safety of all, services will be limited to 25 people in attendance family only as required by Catholic Diocese and state authorities. We encourage you to view the service as it will be streamed live on our website; www.walkerfuneralgillette.com; a link will be attached to William's obituary page. Visitation will be held from 5:00 p.m. to 7:00 p.m., Sunday, May 17, 2020 at Walker Funeral Home; this too we will only allow the limited attendance of 10 in the building at one time at a rotating basis; we encourage the wearing of personal protective equipment.  William Francis (Bill) Pidgeon passed peacefully in his sleep early Tuesday, May 12, 2020 at his home in Gillette, Wyoming. William was born on August 16, 1939 in Baltic, Michigan, to Harvey and Lucille (Willmes) Pidgeon.  He was raised in Michigan and Butte, Montana before moving back to the Upper Peninsula where he graduated from Ontonagon High School in 1958.  While attending high school, he met the love of his life, Sharon Marie Barry.  They were married on October 11, 1958.  They made their home in White Pine, Michigan.  Starting in 1959, they welcomed four daughters into their family.  Bill’s career in the mining industry began at an underground copper mine, The Copper Range Company, in White Pine, Michigan.  He served as a volunteer firefighter for 16 years with the White Pine Fire Department, following in the family tradition of community service.  The family moved to Butte, Montana in 1973 where Bill was employed at Anaconda Copper at the Berkley Pit.  The family moved two more times, eventually settling in Gillette, Wyoming.  Bill started working for the Carter Mining Company Rawhide Mine in 1977 and remained there until his retirement as a senior welding technician in 1998. Bill could find the humor in any of life’s situations, often leaving people rolling on the floor with laughter.  This is the legacy he has passed on to his children and grandchildren.  People often commented that whenever they saw Bill, he always had a friendly smile and a warm hug.  His daughters often liked to tease him about his extraordinary “MacGyver” skills because of his uncanny ability to fix just about anything with duct tape, a paper clip, a wad of gum and a bungee cord.  He always had a backup plan for the backup plan. Bill enjoyed the great outdoors, taking his family on many vacations and camping adventures. After his retirement, he and Sharon traveled extensively with their motorhome throughout the United States and settled in Apache Junction, Arizona for the winters. William is survived by his wife of 61 years, Sharon Pidgeon, daughters Rebecca (Dave) Brown of Apache Junction, Arizona, Theresa (Leo) Miller of Gillette, Debra Pidgeon of Gillette, and Kay (Kevin) Sanger of Fort Collins, Colorado; Grandchildren, Michael (Destini) Furlong, Daniel Miller, Elizabeth Miller, Jeremy (Marianna) Miller, Travis (Lori) Wilcox, Amanda (Chris) Backlund, and Kaylee Bass; Great-Grandchildren, Schuyler, Ava, Antone, Alex, Eva, Parker and Lettie. He was preceded in death by his parents, and a brother, Robert. Memorials and condolences may be sent in care of Walker Funeral Home 410 Medical Arts Court, Gillette, WY 82716. Condolences may also be expressed at www.walkerfuneralgillette.com

To order memorial trees or send flowers to the family in memory of William Francis Pidgeon, please visit our flower store.