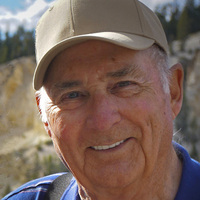 On April 29, 2020, William (Bill) Cecil Olson passed away at Close to Home Hospice of Gillette, WY after a long battle with colon cancer at the age of 81.

Bill was born on March 15, 1939, in Denver, Colorado.  He grew up on his family’s farm in Sundance, WY, before his family moved to Cheyenne in his senior year.  Bill then served in the Navy for four years, which took him to California where he would meet the love of his life, Wilma. He then went through an apprenticeship program with Southern California Edison to become an electrician, which eventually brought him back to Wyoming to work at the Wyodak plant in Gillette, where he worked for 20 years before retiring in 1998.  He was a natural handyman, able to fix nearly anything that could break, and was proud to have built his own home that he and Wilma would spend their retirement in.

He became an avid golfer in retirement, and loved many things, including watching NASCAR races, classic cars, the NFL, woodworking, remote controlled airplanes (go Sagehoppers!), and especially a good laugh.

Bill is survived by his wife Wilma (Collins); his children, Rebecca (Steve) Barkley of Bozeman MT; Jolene Echave of Tucson, AZ; Jamye (Greg) Komel of Denver, CO; his brother Robert Olson of Buena Park, CA; three grandchildren and one great-grandchild. He is preceded in death by his parents, Cleo and Rae Olson, and sisters, Elizabeth Beasley and Patricia Griffin.

Per his request, no memorial service or funeral is planned. His remains will be cremated and spread in a private ceremony.  The family would like to thank all of their friends and family that have given their support in this difficult time, and ask that in lieu of flowers, donations be sent in Bill’s name to benefit the Heptner Cancer Center or Close to Home Hospice. Memorials and condolences may be sent in care of Gillette Memorial Chapel 210 West 5th Street, Gillette, WY 82716. Condolences may also be expressed at www.gillettememorialchapel.com

To order memorial trees or send flowers to the family in memory of William Cecil Olson, please visit our flower store.