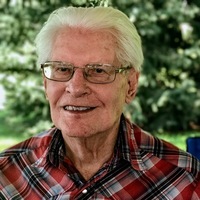 William R. (Bill) Hays, 95, passed away surrounded by loved ones on March 27, 2020 at Close to Home Hospice. A private graveside service and interment will be held at 1:00 p.m., on Wednesday, April 1, 2020 at Mt. Pisgah Cemetery. Bill was born on February 19, 1925 in Gillette, Wyoming to Henry K. and Anna L. Hays and lived his early years on the family sheep ranch in NE Campbell County. The family moved to Gillette in 1936, and he graduated from Campbell County High School in 1943. Upon graduation, he entered military service in World War II, serving in the U. S. Army from 1943 to 1946 in the states, England and France, helping set up the 226th General Hospital in France behind the lines of the Battle of the Bulge. Bill attended St. Louis University from 1947 to 1950 and received his B.S. degree with a 5-year Missouri secondary school certificate. On August 4, 1948, he married Verna Mae Thomas at St. Matthew’s Catholic Church in Gillette. Eight children were born to this union, they were raised in Gillette. In 1950, he was recalled to active duty for the Korean War and spent a year in Japan teaching in the Army Education Center in Nara and Osaka. In 1953 he joined the family insurance business in Gillette, and later owned Hays Agency on Gillette Ave.; with income tax, real estate and all-lines insurance services. After selling the business in 1971, he continued the life insurance business in his later years. Bill was a lector and Eucharistic Minister at St. Matthew’s, as well as a member of the Knight’s of Columbus. Bill is survived by his children Tom (Nancy) Hays, Barb (John) Dietrich, Elizabeth “Betsy” (Jack) Jones, Dave (Regina) Hays, Virginia Hays, Paul (Jodie) Hays, and Dan (Wendy) Hays. Grandkids include Sena (Corey) Piekkola, Susan Dietrich, Nathan (Jennifer) Jones, Desiree Wann, Luke Hays, Steven Forro, Amanda (Bertine) Bahige, Angela (Kelton) Claggett, Melanie Reddon, Andrew Hays, Tim Hays and Allison Hays. Great grandkids are Logan, Mariah and Hailly Barnum, Kailey Breahna and Paige Piekkola, Grayson Jones, Giselle and Drake Bahige, Channing, Carter and Reid Claggett. Bill is preceded in death by his wife Verna, parents, infant son, John; grandson, Eric; and great-grandson, Marcus. In lieu of flowers, the family asked that memorials be made to St. Matthew’s Catholic Church. Memorials and condolences may be sent in care of Gillette Memorial Chapel 210 West 5th Street, Gillette, WY 82716. Condolences may also be expressed at www.gillettememorialchapel.com

To order memorial trees or send flowers to the family in memory of William Richard Hays, please visit our flower store.