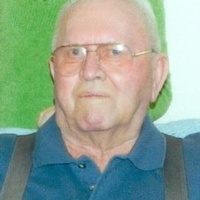 Private family services will be held for Bill Giest; with inurnment at Mt. Pisgah Cemetery. William “Bill” Giest passed away September 15, 2018 at shepherd of the Valley nursing home in Casper, Wyoming of natural causes.  He was 85 years old. Bill was born in Bridger, MT on December 14, 1932 to John Giest and Bertha (Laber) Giest.  He attended school in Fromberg, MT until the 8th grade.  He then quit school to work on the family farm.  Bill married Edna Marlene LaFurge in Bridger, MT on June 1, 1952.  They had five children.

Bill worked in pipeline construction after leaving the farm until he was injured in a work accident that left him disabled at the age of 47.  He was a very accomplished equipment operator and a respected supervisor.  His doctor told him that he would never walk again, but Bill was determined that he would and proved the doctor wrong by being able to walk with just a cane until the last few years.

He loved doing woodwork and built many birdhouses and bird feeders among other small projects.  He also liked watching sports and WWE wrestling on TV.

To order memorial trees or send flowers to the family in memory of William "Bill" Eugene Giest, please visit our flower store.