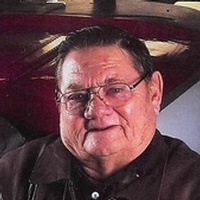 Funeral service for Wayne Laddusaw will be held at 2:00 p.m., Wednesday, February 20, 2019 at High Plains Community Church with Pastor Dan Morgan officiating.  Interment will be at 10:00 a.m., Friday, February 22, 2019 at Riverside Cemetery in Cody, WY. Visitation will take place from 4:00 p.m. to 6:00 p.m., Tuesday, February 19, 2019 at Gillette Memorial Chapel. Wayne Lesley Laddusaw, Honky Lou, 87, of Gillette, WY passed away February 16, 2019 of natural causes. Wayne was born January 31, 1932 to Bertha and Leo Laddusaw in Brookings, SD. He moved to Wyoming in 1941 with his family where he attended school in Meeteetse and Cody graduating in 1950 from Solomon, KS. Wayne spent his junior high summers guiding hunters, wrangling wild horses, and working with the Forest service in Cody, Meeteetse and Worland areas. After graduation Wayne was called to serve with the Wyoming National Guard Battery B of the 300th Armored Field Artillery Battalion where he was a cannoneer. In 1951 his battalion found themselves on the front lines in Korea for two years. Upon returning to Cody from the war, Wayne married Barbara Pease, the love of his life on May 1, 1952. They were married for 56 years raising four wonderful children. Wayne and family finally settled in Gillette, WY where he worked in the oil fields and coal mines retiring from Black Hawk Crane. Wayne was a member of the American Legion Post 42 where he served as commander, a member of the drill team and worked with Boys State. Wayne was appointed by Governor Ed Hershler as the chairman of the first Veteran’s Affair Committee. He was inducted into the order of Saint Barbara for his Chaplin work in the military. Wayne served many years as Chaplin at the Campbell County Memorial Hospital. For his public service work with the coal mines Wayne was presented the Roy Peck award. Wayne worked with the Gillette Gideon’s and was the flight coordinator and Chaplin for Pilots of Christ. The Wyoming Attorney General presented Wayne with the medal of excellence for military service in the Korean War. Wayne also enjoyed yard work, hunting, fishing, wood working, and doing BBQ’s for the coal mines. Wayne was proceeded in death by his wife, Barbara; his parents, Leo and Bertha Laddusaw; brother, Kenneth Laddusaw; sisters, Leona Alexander and Donna Mae Magnus. He is survived by his four children, Chris and Arty Thomas of Leiter, WY; Jacque Laddusaw of Gillette, WY; Robert and Sharon (Perkins) Laddusaw of McMinnville, OR and Cindy and Ernie Miller of Liberty Hill, TX, 6 grandchildren, 11 great-grandchildren, and 3 great-great-grandchildren. In lieu of flowers the family request that memorials be made in Wayne’s name to benefit Pilots of Christ, Wyoming Chapter PO Box 94, Gillette, WY 82717. Memorials and condolences may also be sent in care of Gillette Memorial Chapel 210 West 5th Street, Gillette, WY 82716. Condolences may also be expressed at www.gillettememorialchapel.com

To order memorial trees or send flowers to the family in memory of Wayne Lesley Laddusaw, please visit our flower store.