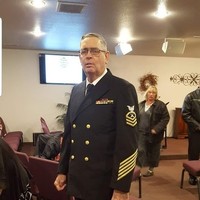 Funeral service for Warren Kline will be held at 2:00 p.m., Friday, September 27, 2019 at Gillette Memorial Chapel with Pastor Steve Carnahan officiating. Warren R. Kline age 69, of Gillette, Wyoming passed away on Monday September 23, 2019 after a valiant battle with colon cancer. Warren was born to Eugene and Irene Kline in Steubenville, OH on August 15, 1950. He was the oldest of 7 children. After graduating from Coshocton High School in 1968 he volunteered to serve in the U.S Navy during the Vietnam Conflict, after 4 years of service he entered the Naval Reserve achieving the Rank of Chief Petty Officer. He worked for  two years with N.A.S.A at the Satellite Tracking Station in Guam. Upon his return to the states he started working with R&F Coal Company in Ohio; which eventually brought him to the Buckskin Coal mine in Gillette, Wyoming operating both shovel and haul truck. While in Bethesda, OH Warren was involved with the local fire dept also serving as Chief. In Gillette he was a member of the local Civil Air Patrol and an active member of the Abundant Life UPC. He loved playing the guitar, golf, fishing, boating and riding his Harley. But more than anything else he was an avid fan of the Cleveland Browns and “The” Ohio State Buckeyes. He leaves behind his wife, Merlinda R. Kline; children, Valentine Kline; Michael Kline; David Kline; Jennifer Cage and Harmin Goforth L. Bilyeu; six brothers and sisters and seven grandchildren. In lieu of flowers, memorials may be made to the Abundant Life UPC or the American Cancer Society. Memorials and condolences may be sent in care of Gillette Memorial Chapel 210 West 5th Street, Gillette, WY 82716. Condolences may also be expressed at www.gillettememorialchapel.com

To order memorial trees or send flowers to the family in memory of Warren Ray Kline, please visit our flower store.