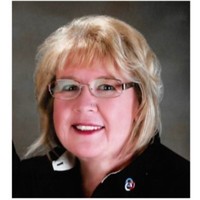 Wanda Noreen Hill age 63, left us behind at 1:50 a.m., on a chilly October 27, 2019, Sunday morning. She passed away in the Close to Home Hospice House in Gillette, WY after a 4 year hard fought battle with kidney cancer. This amazing woman entered this world on March 24, 1956 in Elgin, Illinois to Sharon (Jenerou) and William Hicks. She married her beloved husband, Kenneth Hill, on February 27, 1990 in Gillette, Wyoming. She and Ken had three fantastic children; Mark Charpentier, Lacy Rugar, and Michelle Willey. In her years on earth she enjoyed many things including; fishing, camping, 4-wheeling, gardening, Primerica, and most of all her beloved grandbabies. She was the strongest, braves and most stubborn woman, which is why we love her. She unfortunately was diagnosed with renal cell cancer in 2002, but she fought mighty hard and beat it by removing her left kidney. She lived her next 13 years enjoying her beloved babies and grand kiddos, while fishing til her heart’s content. Then the horrible sickness came back in 2015, she fought long and hard for four years before the battle was won, but unfortunately by cancer in 2019. She is survived by her husband, Kenneth; son, Mark (Wendy Krom) Charpentier of Olivebridge, New York; daughters, Lacy (Corey) Ruger of Sebastian, Florida; Michelle (Lee) Willey of Sheridan, Wyoming; mother, Sharon Hicks of Manistique, Michigan; sister, Rena (Gary) Watchhorn of Manistique, Michgan; brothers, Bill (Kim) Hicks of Escanaba, Michigan; and Steve (Shelly) Hicks of Petoskey, Michigan; grandchildren, Brandon, Ben Bailey, Brayden, Gabby, Acelynn, and Avery. She is preceded in death by her sister, Debra Neff and father, Louis William Hicks. Memorials and condolences may be sent in care of Walker Funeral Home 410 Medical Arts Court, Gillette, WY 82716. Condolences may also be expressed at www.gillettememorialchapel.com

To order memorial trees or send flowers to the family in memory of Wanda Noreen Hill, please visit our flower store.