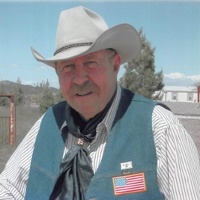 Walter Jay Hauber passed away on June 24, 2019, at the Legacy Living and Rehabilitation Center in Gillette, Wyoming, of natural causes, surrounded by his loving family. He was 90 years old. Walt was born July 20, 1928, to Henry G. and Olevia (Lackus) Hauber in Hulett, Wyoming, and grew up on the family ranch on the Little Missouri River in Crook County. He attended elementary school in the Hulett area, meeting his future wife Arline Fowlkes at Moore Hill School while in fifth and sixth grade. Walt graduated from Sundance High School in 1946. After high school, he worked at various ranches in Montana and Wyoming. Walt was working at his parents' ranch on the Little Missouri River when the infamous Blizzard of 1949 struck. Answering the call to serve his country, Walt was drafted into the United States Marine Corps in December, 1951. He returned home on leave, and married Arline Fowlkes on February 28th, 1952. Walt returned to Camp Pendleton and was deployed to Korea, where he served until May, 1953, returning to Camp Pendleton and reuniting with his wife Arline, until his honorable discharge in December, 1954. He was a lifetime member of the NRA, member of the 1st Marine Division Association, Veterans of Foreign War, and the longest surviving member of the American Legion Post 80 of Hulett, WY. Walt and Arline returned to Wyoming, where Walt went to work for the Homestake Mining Company in Crook County until July, 1960. Son Richard was born on February 25th, 1955, and son Robert was born February 20th, 1957. The family ranch on the Little Powder River near Weston, Wyoming was purchased in 1960 and is still in the Hauber family today. Daughter Krista was born January 5th, 1966. The family raised Hereford cattle for many years. Living in the area of Weston, and its rural setting, the family provided unique services for many. Walt and Arline were honored with an award for recognition for over 60 years of service as observers for the National Weather Service. They were also mail carriers for 16 years from Weston to the Montana border. Walt was a member of the school board for the area for several years, as well, and even pumped oil wells for 35 years. For the county, Walt worked for the Campbell County Sheriffs' Department for 4 years, continuing as a charter member of the Sheriffs' Posse. He was one of the original members of the Campbell County Fire Board, serving in that capacity for 12 years, and was a rural firefighter for Campbell County for 50+ years. He was a recipient of the Campbell County Fire Department Walk of Fame award in 1997. After retiring from raising cattle, Walt and Arline spent 20+ years in Arizona during the winter months, making many dear friends. Walt enjoyed hunting, fishing, camping, and spending time in the mountains. He had a pilot's license, and had his own plane on the ranch. Walt served his family, community, and country with devotion and faithfulness, always ready to help others at a moment's notice at all hours without expecting anything in return. Walt is survived by his wife Arline of 67 years, sons Richard Hauber of Weston, Robert Hauber (Carolyn) of Gillette, and daughter Krista (Michael) Bundy of Gillette; 7 grandchildren, 10 great-grandchildren, and numerous nieces and nephews. Walt was preceded in death by his parents, two brothers, and one sister.

The family wants to thank the nursing staff and health care providers who treated Walt with kindness and compassion. Celebration of life services will be held on Saturday, July 6th, at 2 p.m. at the Senior Center in Gillette, Wyoming, with interment to follow at a later date at Moore Hill Cemetery in Crook County. In lieu of flowers, donations can be made to Moore Hill Cemetery or a charity of your choice.

To order memorial trees or send flowers to the family in memory of Walter J Hauber, please visit our flower store.