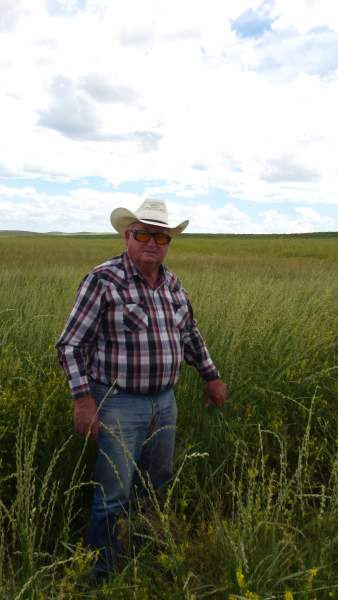 Funeral service for Tom F. Davis, 85, of Moorcroft will be held 2 p.m., Thursday, November 17, 2022 at First Presbyterian Church in Moorcroft, with Voy Cox officiating.  Interment will follow in the Moorcroft Cemetery. Mr Davis died at his home Thursday, November 10, 2022. Tom was born August 15, 1937 in Sundance, WY to Tex and Isabel (Zimmerschied) Davis of Moorcroft. He grew up cowboying but his work also included road construction, all things related to the oil field, and over-the-road trucking. However, his heart was always in ranching.  While working a construction job in Casper he met Angie Manderfeld.  They married October 8, 1960, and had three children:  John (Jamie) Davis of Oshoto, Kris Davis of Wenatchee, WA, and Kathy (Leroy) Sabe  of Billings, MT. He was a founding member of the Moorcroft Jubilee, and a member of the Crook County Horseman's Association and the Moorcroft Rodeo Club. He was instrumental in the construction of the Moorcroft arena.  He also served as Crook County commissioner and volunteer fire fighter. Tom enjoyed fishing and camping in the Big Horns, and hunting elk; the last of which he harvested last year.  After he and Angie's retirement in 2004 they moved to the family place south of Oshoto where most summer nights you could find him sitting on the back deck, swatting flies with a toddy in hand; enjoying the view of the Tower and watching the wildlife.  He never met a stranger and will be missed by friends and family. He is survived by his wife of 62 years, Angie, all three children and spouses, as well as his sister, Donna Garrison; niece, Jeannie Cunningham and nephew, Don Garrison, all of Powell.  Tom is preceded in death by his parents, Tex and Isabel. In lieu of flowers memorials in Tom's name are suggested to benefit the Oshoto Volunteer Fire Department, Zone 25. Donations can be sent to 1754 D Road, Moorcroft, WY 82721.  Please visit www.GilletteMemorialChapel.com to share your remembrances and condolences with the family.

To order memorial trees or send flowers to the family in memory of Tom Davis, please visit our flower store.