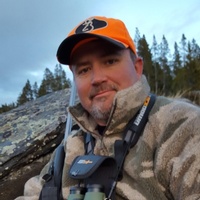 Toby Stone, age 44, passed away Tuesday, March 6, 2018, of a heart attack while doing something he loved, snowmobiling on Togwotee Pass.  Funeral services will be held Friday, March 16, 2018 at 11:00 a.m. at Family Life Church with Andy Carsrud officiating.

Toby Tod Stone was born on March 21, 1973, the son of Mike and Terria (Edwards) Stone.  Toby grew up in Gillette BMX racing, skateboarding, building bigger and better ramps and jumps in the backyard, playing soccer for the Gillette Camels, and making lifetime friendships.

He spent much of his childhood at his grandparent’s ranch south of town playing with his siblings and cousins.  “Rocky,” as he was known by his family, stayed busy building forts and attempting to float homemade rafts across the reservoir.  No matter how wet and muddy everyone else got, Toby managed to stay clean and dry because he hated getting dirty.

Toby was good with his hands and could fix anything.  He honed those skills by working at the Bicycle Shop for more than six years.  Not only did he gain an incredible work ethic that served him well for the rest of his life, but created enduring friendships with his co-workers.

On March 16, 2000, Toby met the love of his life, Jamie Jacobson.  Toby wasn’t too happy with Dave Slattery when he said they needed to pick up Dave’s cousin in Billings. Little did Toby know that stop and a game of pool would change his life forever.   Toby and Jamie were married on July 31, 2004 in Story, Wyoming.  They shared many amazing moments.  They traveled to Hawaii and joined the rest of the Stone Family on trips to Homer, Alaska to visit lifelong friends, Joe and Sharan Dwyer.  Jamie and Toby traveled with Jamie’s parents and family as well.  No matter where they went, their favorite times were spent exploring the Big Horns together.

On January 29, 2009, Toby became a father when Hawkins Cooper was born. None of Toby’s success or adventures compared to the joy he found as a father.  He was patient, loving, and truly committed to being the best dad he could be.  When Avary Jaymes joined the family on December 13, 2012, Toby was completely smitten.  There was nothing he wouldn’t do to make sure Jamie, Hawkins, and Avary had everything they needed to be comfortable and happy.  His happiest times were spent with his family camping, traveling, cheering on the Rapid City Rush, and watching movies with popcorn made in their own special popcorn machine.  Hawkins was Toby’s shadow going everywhere and learning everything he could from his dad, especially about camping and hunting.  Avary’s favorite things were to wrestle and read books with her dad.

Having a tightknit family was very important to Toby.   Family dinners, birthdays, camping trips and time together were priorities. Toby’s love for his nephews knew no bounds.  He made sure to include Colton and Mac in his camping, ATV riding and hunting adventures.  Toby looked forward to winter when he could spend his days off snowmobiling with friends.

Toby spent more than 20 years working at Black Thunder Mine.  On February 2, 2018, he was promoted to lead operator on the dragline.   He was known for his work ethic and attention to detail.   While there were always shenanigans in the car on the way to and from work, as soon as he got to the mine he put on his game face and gave 110% to ensure that he was productive and safe.

Toby spent hours creating beautiful wood working projects.  A trip to Rapid City meant a truck and often a trailer full of supplies for the next project.  He had a knack for carpentry and used his hands to build things that will endure and remind those who see them of his meticulous and perfectionist ways.  He never settled for anything less than his best.  If he had a Sawzall in his hands, you knew he meant business.  No matter what the project was or how badly something was torn apart, Toby could put it back together.

Every fall Toby would head to the Big Horns or Gros Ventre River area with family and friends to hunt elk and enjoy camping.  Toby planned these adventures for months.  His camps were always well-stocked with amenities better than home.   Toby loved the thrill of the hunt and could climb the side of a mountain faster on foot than other guys could drive it.

Toby was always known for saving his money to buy nice things and take care of others.   After Jamie’s father passed away, Toby purchased a larger camper to ensure Dee, Jamie’s mom, would always be part of the memories Hawkins and Avary made up in the mountains.  Last summer they all went to Glacier National Park in Montana and were planning a trip to Idaho this summer.

Toby was a man of his word.  Anyone who knew him knew exactly where they stood with him.  He was a loyal and protective friend.  He lived his life in a way that made others around him know what mattered most and want to live their best lives too.  There was nothing he wouldn’t do for his family and friends.

Toby’s parents see Toby, Jeani, Kelly, Jamie and their grandchildren as perfect in every way, and upon which their lives revolve.  There is now a hole in their heart that can never be replaced.

He is preceded in death by his grandfather, Guy Bud Edwards; aunt, Laura Waterhouse; and his father-in-law, Jake Jacobson.

In lieu of flowers, a memorial fund has been established for his children at the Bank of West to Toby Stone Memorial. Memorials and condolences may be sent in care of Gillette Memorial Chapel 210 West 5th Street, Gillette, WY 82716. Condolences may also be expressed at www.gillettememorialchapel.com

To order memorial trees or send flowers to the family in memory of Toby Stone, please visit our flower store.