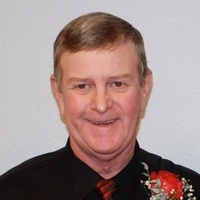 Thomas Dean Slocum died on October 12, 2021 in Gillette, WY in hospice at The Legacy.

You would have guessed his cancer finally took him, but since he was a prickly person in life, why would death be any different? His appendix is what finally took him out. Not smoking. Not diabetes or his blood cancer. But the one part of your body that there is no discernable use for. He couldn’t freaking believe it, and neither could his family.

Tom was born to Howard and Betty Slocum on July 2, 1951 in Rapid City, SD and was the third of nine children. He enlisted in the Air Force in 1971 and worked on airplanes, or in his words “kicked the tires” and sent them off. He married Jacquelin Crowder on September 11, 1971 and was tickled to have celebrated his 50th wedding anniversary.  They were the quintessential old married couple who loved each other very much.

He had two children, Sandra Lee in July 1972, and Eric Justin in October 1974. He moved his family to Gillette in 1975 and has been here ever since.

He loved racing with his brothers and did so in the late 70s and 80s. When he quit racing himself, he loved to watch his son and nephews’ race and give unsolicited advice. In later years, he enjoyed hunting and fishing with friends. He could spin a pretty good story, most of which were true. He loved his family and traveled to many different events, graduations, and all the family reunions to see them and to celebrate with them.  He will be sorely missed, but he did a great job teaching the younger generations to speak “sailor.”

A memorial service will be held at a later date for family and friends. Memorials and condolences may be sent in care of Gillette Memorial Chapel 210 West 5th Street, Gillette, WY 82716. Condolences may also be expressed at www.gillettememorialchapel.com

To order memorial trees or send flowers to the family in memory of Thomas Slocum, please visit our flower store.