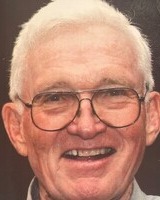 Mass of Christian Burial for Thomas Murphy will be held at 11:00 a.m., Friday, April 8, 2022 at St. Matthew’s Catholic Church with Father Cliff Jacobson officiating; interment to follow at Mt. Pisgah Cemetery. Visitation will take place from 5:00 p.m. to 6:00 p.m., Thursday, April 7, 2022 at Gillette Memorial Chapel with Prayer Vigil to begin at 6:00 p.m. Thomas James Murphy, age 90 of Gillette, Wyoming passed away peacefully on April 4, 2022, at Legacy Living Center with family by his side.  He was born on May 24, 1931, to parents Marie Ann Murphy (Sullivan) and Thomas Bonaventure Murphy in Spalding, Nebraska, the third of six children.  He spent his childhood on the Sullivan family farm attending school in Spalding and graduated from Spalding Academy in 1949.  After graduating, Tom enlisted in the Airforce and was stationed in Germany.  Upon his return from Germany and discharge from the Air Force, he met the love of his life Nancy Lee Hicks, and they were married in September of 1956.   He graduated from Creighton University School of Pharmacy in 1958 and he and Nancy moved to Gillette, Wyoming purchasing what became Murphy Drugstore.  Together they made their home and built their business serving the Gillette and Campbell County Community.   Tom and Nancy raised their family including Thomas Michael Murphy (Dianna), Kathryn Marie Orozco (Paul), Theresa Ann Norfolk (Paul) and James Patrick Murphy (Allison).  Their family also included several young people from Australia, Belgium, Germany, and Switzerland who came to the United States, lived, and shared their cultures and friendship with the Murphy family.  Tom’s passion was their lake place at Keyhole Reservoir.  For years they opened their cabin to family and friends teaching hundreds of people to waterski.  Many were the celebrations held at the cabin including weddings, holidays, graduations, and family reunions.  Tom’s favorite ending to a day of boating, fishing, or cutting firewood included a nightly gaze into God’s heavenly universe on the deck of the cabin.  Tom remained a steadfast supporter of Gillette, Campbell County and Wyoming serving many civic roles including 20 years as a Board Member for the Campbell County Memorial Hospital, 12 years on the State Board of Pharmacy and President of Wyoming Right to Life to name a few.  Additionally, Tom’s commitment to his faith and pro-life cause showed forth in his consistent support of St. Matthew’s Catholic Church.  He and Nancy became snowbirds in 1996 and opened their winter residence to a host of family and friends in search of a winter reprieve. Tom is survived by his wife of 65 years, his four children and their spouses, sisters Betty Rindone (Guido) and Sally Kavalec, and eight grandchildren:  Thomas Clark Murphy (Brittany), Alicia Sifuentes (Lico), Micah Whalen, Meghan Hovee (Luke), Mari Whalen, Jacob Norfolk (Havley), Marie Hansen (Brett), and Monica Norfolk.  He is also survived by 9 beautiful great-grandchildren.  Tom’s love of children was abundantly evident in the time he spent with all of his “kids”.  Tom was preceded in death by his parents, two sisters Mary Catherine Bopp and Ellen McClellan, brother Michael Murphy and an infant brother. Memorials may be made to benefit John Paul II Catholic School, Women’s Resource Center and Gillette Community College.  Memorials and condolences may be send in care of Gillette Memorial Chapel 210 West 5th Street, Gillette, WY 82716 and may be expressed at www.gillettememorialchapel.com

To order memorial trees or send flowers to the family in memory of Thomas James Murphy, please visit our flower store.