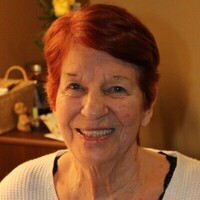 Thelma Darlene Willey “Boots”, 83, passed away on May 15, 2021, in Gillette at The Legacy Living and Rehabilitation Center. Boots was born February 19, 1938, to Walter Burfiend and Arbra (Landman) in Iowa. Boots worked at the Pioneer Manor Nursing Home in Gillette, WY for 27 years as a CNA. She and her husband later moved to Arkansas. In 2015 Boots moved back to Sheridan, WY for a short time and later was moved to the The Legacy Living and Rehabilitation Center where she remained until the time of her passing from Alzheimer’s Disease. Boots was blessed with amazing, loving, caregivers at The Legacy, whom we’re forever grateful for. She is survived by her children, Charles (Cheri) Czermak, Washington; Lance Czermak, California; Denic Czermak, Wyoming; Jacqueline (Norman) Tibbetts, Alaska; Chris (Jules) Henning, Missouri; brother, Lawrence “Sonny” Burfiend, sisters, Florence Flack and Correne Ilsley of Sheridan, WY. Boots was preceded in death by her parents, her husband, Charles Willey; son, Mark Bacus and sister, Maryetta Wood. A private memorial service will take place on a later date. Memorials in honor of Boots may be made to the Alzheimer’s or Hospice Foundations in care of Gillette Memorial Chapel, 210 West 5th  Street, Gillette, WY 82716.

To order memorial trees or send flowers to the family in memory of Thelma Darlene Willey, please visit our flower store.