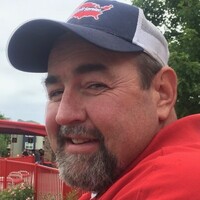 Terry Wayne Sims, 49, devoted husband and father died Thursday, June 2, 2022, at Presbyterian St. Luke’s Hospital in Denver, Colorado, with his wife, Kim, by his side. Terry was born July 29, 1972, in Gillette, Wyoming to James and Jeanie Sims.  Terry lived and worked in Gillette his entire life and loved spending time with his family and friends. In 1991, Terry graduated from Campbell County High School, where he played football and wrestled.  After high school, Terry worked in the oilfield, on workover rigs, and later as a pumper in the methane gas fields.  He was working at National Belt Service as a salesman at the time of his death. In 1993, Terry married Jennifer Matthews and from this union, they had one son, Bryer Wayne Sims. In 2002, Terry met Kim Richards and they married on May 24, 2003.  They were each other’s best friend and lifelong companions.  They were blessed with two sons:  Blake Allen Sims and Brent Dillen Sims. Terry loved to spend time outdoors, camping, hunting and piddling in his garage.  But his most favorite pastime was watching his sons play sports, especially football.  He spent time coaching them in their activities and was their biggest fan. Terry is survived by his loving wife, Kim, 3 sons Bryer (Ashlyn), Blake and Brent Sims (who he affectionately called his “Killer B’s”), his parents James and Jeannie Sims, his brother Tony (Ashley) Sims, sister Lisa DeBord and many aunts, uncles, cousins, nieces, and nephews. Terry was preceded in death by his grandparents and numerous aunts, uncles, and cousins. Funeral services are to be held at First Presbyterian Church at 10:00 a.m. Tuesday, June 14th, with burial at Mt. Pisgah Cemetery immediately following the service. Memorials and condolences may be sent in care of Gillette Memorial Chapel 210 West 5th Street, Gillette, WY 82716. Condolences may also be expressed at www.gillettememorialchapel.com

To order memorial trees or send flowers to the family in memory of Terry Wayne Sims, please visit our flower store.