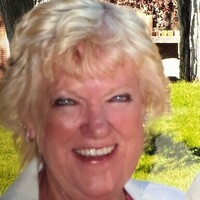 Terry Margaret Forgar passed away Sunday February 13, 2022, peacefully surrounded by family after a two-and-a-half-year battle with cancer at the age of 68. Terry was born December 6, 1953, in Tampa, Florida to Robert Rosier Sr. and Elsie (Gibbs) Rosier.  She graduated from Hernando High School in 1972 where she met William (Bill) Bennett.  They were married in 1974 and had four children Billy, Terry, Cassy, and Toby.  Terry and Bill ended their marriage but remained lifelong friends.  She later met Jack Forgar and they married in 2013.  Terry grew up on a farm where she loved riding horses and taking care of all the animals. She developed a love for horses and cows and loved to be around them.  She started her career with Campbell County School District and then transitioned to N.E.W. BOCES where she worked for fifteen years.  She retired from Campbell County Health, where she loved taking care of the children at the daycare.  She was loved by the little ones and was often known as “Grandma Terry” to them.  She enjoyed going camping, fishing, and sightseeing, but her all time love was to be with her children and grandbabies.  She was extremely proud of them all and spent as much time as possible with them.  Terry is survived by her children Billy (Tammie) Bennett, Terry (Jon) Lueras, Cassy (Cody) Morris, Toby (Courtney) Bennett; grandchildren Aurora, Morgan, and Rylee Lueras, Shaye, and Raegan Morris, Carter Bennett; siblings Robert Rosier Jr., Willy (Tammy) Rosier, Cindy Rosier, Rebel (Robert) Miller and many nieces and nephews.  She is proceeded in death by her parents Robert Rosier Sr. and Elsie Rosier, brothers Baby Boy Rosier, Edward Rosier, niece Heather Knittle and nephew Joshua Mitchell. She was a loving mother, grandmother, sister, and aunt who would help anyone she could.  She was a spiritual person who never wavered in her faith.  Her favorite verse was John 3:16, “For God so loved the world, that he gave his only begotten Son, that whosoever believeth in him should not perish, but have everlasting life. “Memorial service will be announced at a later date, per her request to wait until Spring so “she and others are not standing outside freezing”.  Memorials and condolences may be sent in care of Gillette Memorial Chapel 210 West 5th Street, Gillette, WY 82716. Condolences may also be expressed at www.gillettememorialchapel.com

To order memorial trees or send flowers to the family in memory of Terry Margaret Forgar, please visit our flower store.