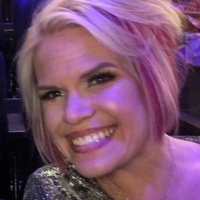 Teran Elizabeth Dickinson, age 34, died on Monday April 29, 2019 in Williston, ND.  Teran entered this world on February 19,1985 with guns a blazing to the delight of her parents Toby and Christie Dickinson.  At five years of age she was diagnosed with juvenile diabetes.  She was relentless in her battle with the disease refusing to let it alter her life

Teran attended grades K-12 in Gillette WY.  She participated in Rodeo, winning several buckles in goat tying barrel racing, pole bending, and all around cowgirl.  In addition she was crowned princess of the Broadus and Gillette Little Levi Rodeos.

During her youth, she played basketball, soccer, and volleyball on both school and traveling teams. Her track career ended abruptly when she discovered she had to run to participate.

After high school she attended Wichita State College in Kansas, where she enjoyed  extra curricular activities.   After college she lived and worked in Phoenix, AZ until deciding to go to work in Williston, ND.

Teran truly lived life to the fullest; she left nothing on the table.  Her passing has left a hole that her family will be unable to fill.  From birth she filled her family with love and joy.  Her father, Toby, preceded her in death as did  grandparents Keith and Carol Dickinson, Grandpa Bus Waltman, Uncle Marlin Dickinson, Cousin Maggie Krejci and Uncle Larry Merrill.   She is survived by her mother Christie (Andy Andrews) Dickinson, Grandma Betty Waltman, Step grandparents Jean Mellon and Andy (Glora) Andrews, Aunt Kay Merrill, Uncle Riley (Dee) Waltman, Aunt Delinda Royse and numerous cousins.

In lieu of flowers memorials are suggested to the Barbara Davis Center for Juvenile Diabetes, and the Bascom Palmer Eye Institute in Miami Florida.  Memorials and condolences may also be sent in care of Gillette Memorial Chapel 210 West 5th Street, Gillette, WY 82716. Condolences may also be expressed at www.gillettememorialchapel.com

To order memorial trees or send flowers to the family in memory of Teran Elizabeth Dickinson, please visit our flower store.