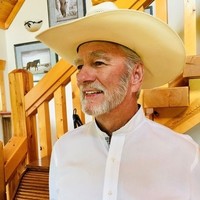 Memorial service for Stewart Hackett will be held at 2:00 p.m., Saturday, July 11, 2020 at The Church at the Barn with Mike Morrison officiating. Stewart E. ‘Stu’ Hackett age 72 went on to green pastures to be with his Lord and Savior on January 3, 2020. He passed away at his home in Excelsior Springs, Missouri, after battling kidney failure. Stewart was born to Allan and Clara ‘Peg’(Morris) Hackett in Gillette, Wyoming on August 13, 1947 and grew up in the rugged oilfield town of Midwest where he attended and graduated from Midwest High School. After completing the electrical apprentice program in Casper, he moved with his wife Jackie, and their two children to Gillette where he worked as an electrician, built a log home and raised his family. He enjoyed hounds, horses, gospel music, taking photos and fishing in the Big Horn Mountains. Stewart was his kid’s biggest fan and he did all he could to provide for and support them in their endeavors especially rodeo. He loved all things country and had a deep faith in the Lord which led him to create Country Life Ministries in 1985 to share the gospel (“good news”) of God’s redeeming love through his personal testimony and music. In 1991 Stu went to work for Burlington Northern Railroad as a master electrician which took him to Kansas City, Missouri where he met and married his wife Lella. They built a home and he took great pride in his job keeping the railroad bridges operating for trains and barges on the Missouri River. His awareness and actions even earned him BNSF’s “On Guard Employee of the Year Award” in 2006 for thwarting terrorist activity. Stewart retired from Burlington Northern Santa Fe Railroad in 2013 but kept busy working on their acreage, caring for his horses and making trips to visit family in Wyoming and Montana. Although Stewart experienced trials that resulted in life long health issues, he overcame them by clinging to Jesus as his Rock. He was a man of his word with a kind heart who was always eager to help someone in need. The joy of the Lord truly was his strength and he will be greatly missed. Stewart is survived by his wife, Lella; brothers, Gerald Morris and Bobbe Hackett; children, Shannon (Bryan) Tarter and Justin (Cheryl) Hackett; numerous grandchildren, nieces, nephews and cousins along with many good friends. Memorials and condolences may be sent in Stewart’s name to PO Box 397, Ashland, MT 59003.  Memorials and condolences may be sent in care of Walker Funeral Home 410 Medical Arts Court, Gillette, WY 82716.

To order memorial trees or send flowers to the family in memory of Stewart E Hackett, please visit our flower store.