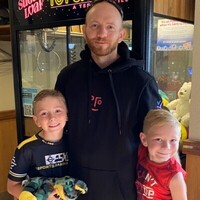 Steven Joseph Stice was born on June 18, 1990, the son of Ronald Joseph Gay and Noreen “Lynnae” Stice. He grew up in Casper, Wyoming and went to Natrona County High School.  He married Carolyn Jenkins, of whom he was estranged. Three children, Zeke, Zach, and Zane Stice were products of that union.  Zane passed soon after birth.  He loved his children very much; they were the light of his life, and you could see it in his eyes whenever he was with them or spoke of them.

Steven led a complicated life.  His last eight months were spent in Gillette where he was working utilizing his associates degree in welding to work for Ramsey Hill Exploration and was actively setting up a residence where he could bring his hopes and expectations all together and to be able to regain custody of his children.  His mother, Lynnae, father, Ron and stepfather, Tim were strongly supporting him and really believed that he was finally on the way to realizing the strong potential and kind humanity that was always so evident in his actions and humor.  On the morning of February 15, 2022, he was involved in a motor vehicle accident on the way to work and died instantaneously.  We are certain his last thoughts were of realizing his plans and living the life that he so desperately wanted with his sons. He will be missed greatly.

Steven is survived by his sons, Ezekiel Joseph and Zachariah Edward Stice of Powell, WY; his father, Ronald Joseph Gay of Casper, WY; his mother and stepfather Noreen Lynnae and Timothy Scott Seeley of Powell; his brothers and sister, Joshua DuWayne Stice of Whitefish, MT, Jeffery Scott Seeley of Plattsmouth, NE, Kyle Aaron Seeley of Sheridan, WY, and Brandi Nichole Seeley of Telluride CO; and close friends that were always there for him, Austin Ideen and Kari Hayes of Gillette, WY; and his estranged wife, Carolyn Jenkins Stice of Casper, WY.

Memorials and condolences can be sent in care of Gillette Memorial Chapel 210 West 5th Street, Gillette, WY 82716. Condolences may also be expressed at www.gillettememorialchapel.com

To order memorial trees or send flowers to the family in memory of Steven Joseph Stice, please visit our flower store.