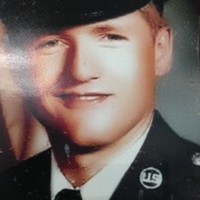 Memorial service for Steven Rhodes will be held at 2:00 p.m., Thursday, January 30, 2020 at Walker Funeral Home; Father Bryce Lungren officiating. Steven Michael Rhodes, 59, of Gillette, Wyoming, passed away peacefully in his sleep on January 25, 2020 of natural causes. Steven Michael Rhodes was born in Emporia, Kansas on January 23, 1961. He graduated from Campbell County High School and went on to join the United States Air Force, at Ellsworth Air Force Base. Steve worked as a bouncer at the Sands Lounge. His sister, Sandy, broke him out on the rigs for Exeter Drilling for a time. He worked in Cheyenne, Wyoming at a long-term care facility for a number of years as a CNA, one of his most fulfilling careers; as he would discuss for hours about his time there. He also delivered parts for Eagle Courier until his health forced him to retire. In 2018 he learned he had a son, Shawn Anderson, and a granddaughter, Valerie. Both quickly found a special place in his heart. Steve enjoyed watching all things Star Trek and Godzilla. He was a talented wood carver, painter, and writer. He made his own swords an staffs for role playing games. He was a great friend to his neighbors and family. He loved playing Santa for the kids in the Christmas season. Steve is survived by son, Shawn (Robin) Anderson; granddaughter, Valerie; brothers, George H. (Sheila) Rhodes Jr. and Daniel (Jackie) Rhodes; sisters, Sandra Thomas and Lela (Chris) Rhodes-Mudge, and many nieces, nephews, two good friends, Curk and John, along with extended family and friends. He is preceded in death by his parents, George H. Rhodes Sr. and Lela G. Rhodes. In lieu of flowers the family that donations be made in Steve’s name to Walker Funeral Home 410 Medical Arts Court, Gillette, WY 82716. Condolences may also be expressed at www.walkerfuneralgillette.com

To order memorial trees or send flowers to the family in memory of Steven Michael Rhodes, please visit our flower store.