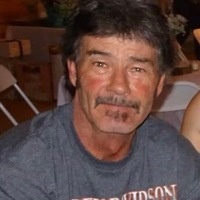 Memorial service for Steve Gearhart will be held at 2:00 p.m., Thursday, August 11, 2022 at Gillette Memorial Chapel. Steve Wayne Gearhart, age 63 was called home August 1, 2022 to spend eternity with Jesus. Steve was the first-born son of Beverly Gearhart and Charles “Bud” Gearhart on March 4, 1959 in Leadville, CO. He was later joined by his brothers, Gary and Ronnie and sister, Rhonda. Together as a family they moved to Delta, UT and later moved to Gillette, WY in 1977. Steve graduated Campbell County High School in the same year. Steve went on to meet his now former wife, Pam and she gave birth to their first son (Steven Gearhart). Steve enjoyed coaching son Steven’s basketball teams and loved the time spent with the rest of the Rozet Mustangs basketball team. Steve would load the players up into the “big blue” van and away they’d go. His coaching days didn’t stop there, Steve went on to coach his son’s and nephew’s baseball teams. Steve could also be found at the local BMX track watching his youngest son (Kaleb Lamasters) tear up the track. He always got a kick out of watching Kaleb carry around trophies bigger than himself. Steve became a “papa” in 2019 when his daughter-in-law Melissa and son, Steven gave birth to Hudson Wayne Gearhart. Steve couldn’t be more excited to hear they shared middle names. He spent the last 15 years with the love of his life, Gayle. Gayle has two children (Ashley and Robert) and 5 grandchildren that he loved dearly and thought of as his own. Steve was a man of few words, unless you got him talking about his passions which included childhood memories with his kids, nephews, grandkids, fishing, road trips with Gayle and Harleys. The neighborhood kids always loved being around Steve, he would loan out dirt bikes, go carts, for the kids to ride and was the best quarterback on the block. He worked hard and was a giver, he gave everything even if it left him with nothing. Steve had his longest careers with Coca Cola bottling, Hettinger Welding, and DA Eldridge. He loved his co-workers and considered most of them family. Steve’s most recent job included driving for the local cab company. He enjoyed talking with people and making sure they got home safely. He was the definition of a good man and although Steve’s time on earth was cut short, he made a long-lasting impression on everyone he met. Steve now joins his Father in heaven and will be greeting us at the gate. He will truly be missed by his family mother, Beverly Gearhart, sons, Steven and Kaleb; daughter, Melissa; daughter-in-law, Melissa; brothers, Gary and Ron; sister, Rhonda; daughter-in-law, Melissa Gearhart; nieces, Terynn, Cassidy, Misty; nephews, Casey, Shane, Tanner, Kelby, and Taylor; grandson, Hudson; partner, Gayle and Family. Memorials and condolences may be sent in care of Gillette Memorial Chapel 210 West 5th Street, Gillette, WY 82716. Condolences may also be expressed at www.gillettememorialchapel.com

To order memorial trees or send flowers to the family in memory of Steve Wayne Gearhart, please visit our flower store.