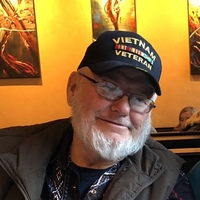 Memorial service for Stanley Johnson will be held at 1:00 p.m., Saturday, July 10, 2021 at Gillette Memorial Chapel with Chaplain Gordon Harper officiating. The Lord called Stanley Arvid Johnson home Thursday, November 19, 2020; Stan was 75. He passed away at home. Stan was born December 31, 1944, in Greeley Colorado to Arvid C.and Rebecca M. Johnson (Miller). He was raised and educated in Wheatland, Wyoming, graduating from Wheatland High School in 1963. He attended Denver Automotive Institute and worked at various repair shops in Wheatland until he was drafted into the Army in June 1965. He completed basic training in Fort Leonard Wood, Missouri. He served in Vietnam from June 1966 to July 1967 at which time he was honorably discharged. He was employed as a mechanic upon returning from service. On August 20, 1967 he married the love of his life Linda Kaye Wagner. They moved to Fort Collins, Colorado in January 1968 where he was employed at Woodward Governor. In 1971 they returned to Wheatland where he worked at Walthall Chevrolet. In 1972 they moved to Sidney, Nebraska. He worked for Platte Valley Construction until 1974 when they moved to Sinclair, Wyoming; working at Medicine Bow Coal Mine. In 1982 they moved to Gillette, Wyoming. He worked at various coal mines as a heavy equipment mechanic until retiring in 2008. He was an avid fisherman and hunter. He enjoyed tying flies, reloading, gunsmithing and spending time with his family. He is survived by his wife of 53 years Linda; two daughters Christie A. Johnson of Casper, WY, and JoLana K. Zimmerman (Jason L.) of Billings, MT; granddaughters Steffany K. and Jasmyn K.along with numerous nieces of nephews. He was preceded in death by his parents, maternal and paternal grandparents, sisters Kathleen and Janet, and twin daughters.  Memorials and condolences may be sent in care of Gillette Memorial Chapel 210 West 5th Street, Gillette, WY 82716. Condolences may also be expressed at www.gillettememorialchapel.com

To order memorial trees or send flowers to the family in memory of Stanley Arvid Johnson, please visit our flower store.