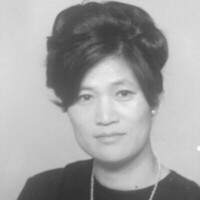 SoChae Kim Sinclair, 77, of Gillette, Wyoming passed away from complications related to COVID-19, on December 25, 2020 at the Legacy Living and Rehabilitation Center.  Her husband, son (Robert), and daughter (Betty) were by her side.

SoChae Kim was born December 13, 1943, in Hungnam, Korea to her parents, ManYelle Kim and Aesun Jo.  During the Korean War, SoChae’s family was gravely impacted by the hardships that many Korean families endured.  In December 1950, her family was evacuated to the Island of Geoje on the S.S. Meredith Victory leaving their home in Hungnam with only what they could carry.  They were then relocated to Busan, Korea where she grew up and later owned a successful beauty salon.  Sochae’s experiences left an indelible sense of inner strength that was a guiding principle throughout her life.  She believed her life story was an example for her children regarding the importance of self-reliance and perseverance.  In 1968, SoChae met William Sinclair while he was stationed in Wae Gwan, Korea, serving with the 44th Engineering Battalion in the United States Army.  They were married that year and subsequently moved to White River, South Dakota where they were active members in the community and school district.  She was a member of the UMW (United Methodist Women) and the American Legion Auxiliary for nearly forty years.  SoChae was a constant self-learner who was always mastering new skills in cooking and gardening, most notably her beautiful rose gardens throughout her and William’s property.   In 2017, SoChae and William relocated to Gillette, Wyoming to live closer to family due to health reasons.  SoChae’s energetic spirit and sense of humor left a lasting impression on everyone she met.  She was always willing to help people in need and believed that everyone could make something of themselves through hard work and an opportunity.

SoChae’s wishes were to be cremated and although a service will not be held at this time, there will be a memorial service held on July 09, 2021 at 1:00pm MST at the Black Hills National Cemetery, Sturgis, SD.

Memorials and condolences may be sent in care of Walker Funeral Home 410 S. Medical Arts Gillette, Wy 82716. Condolences may also be expressed at www.WalkerFuneralGillette.com

To order memorial trees or send flowers to the family in memory of SoChae Kim Sinclair, please visit our flower store.