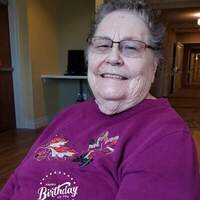 Shirley Ann Golay peacefully went home to Lord Saturday October 9, 2021. Shirley was born July 24, 1934 in Mitchell, SD to Ruth and Vernon Lytle. She grew up in Pukwana, SD and was the 2nd youngest of eight children.  In September 1952, Shirley enrolled in nursing school at Saint Mary’s Practical School in Pierre, SD. She graduated in 1954 and moved to Wyoming.  On New Year’s Eve 1954, she met George Golay and the two were married on March 26, 1955.  They were blessed with four children over the course of five years. Sixteen years later, they were blessed with their fifth child.  She obtained her Associates Degree in the mid 1990’s at the age of 50. In 1993, Shirley and George bought a fifth wheel and traveled all over the United States. They spent their summers at Sheridan Lake and their winters in Phoenix, AZ. Shirley moved into the Pioneer Manor in August 2014. Shirley was a hard worker and loved taking care of people. She had a kind nurturing nature. She loved her family more than anything.  She was proud of her children, grandchildren, and great-grandchildren.  She was also an amazing baker. One of her most delicious family favorite treats were her homemade cinnamon rolls. She was loved by all who knew her. She was well known for her strong faith in God. She accepted the Lord as her savior in 1952. No matter how hard life was, Shirley remained close to the Lord. Anytime a prayer was needed, Shirley knew exactly what to say.  She could be found in church most Sundays singing and rejoicing. She had a beautiful voice, a gentle touch and was truly an angel on earth.  Shirley will be missed dearly but we take comfort in knowing she is home at last. Shirley is survived by her five children; Vernon (Tana) Golay; David Golay; Debbie (Tim) Runyon; Dawna (Keith) Koski; and Michael (Moriah) Golay; nine grandchildren; twelve great-grandchildren; and two great-great grandchildren. She was preceded in death by her parents, Ruth and Vernon Lytle; brothers; Alfred; Earl; Kenny; John; sisters; Alice; Helen; and Madge; and husband George. A private family service will be held at a later date.  Memorials and condolences may be sent in care of Walker Funeral Home 410 Medical Arts Court, Gillette, WY 82716. Condolences may also be expressed at www.walkerfuneralgillette.com

To order memorial trees or send flowers to the family in memory of Shirley Ann Golay, please visit our flower store.