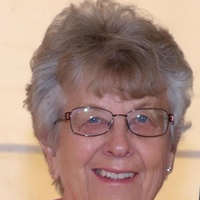 Memorial service for Shirley Bagwell will be held at 10:30 a.m., Thursday, June 14, 2018 at Inspiration Gardens at Mount Pisgah Cemetery with Pastor Mark Stevens officiating. Shirley Joyce (Collins) Bagwell was born June 23, 1945 in Sheridan, Wyoming.  She was the oldest of three children born to Marion and Edith Collins.  She grew up in Arvada, Wyoming where she was related to most everyone. Cousins and best friends were one in the same.  She graduated from Arvada high school in 1963 and then attended Sheridan College for 2 years.  She met William “Dave” Bagwell in 1964 at a dance at 4G Clubhouse while his family was in Arvada for the harvest.    Shirley completed her teaching degree at the University of Wyoming in 1967 and she and Dave were married that same summer.  For the first year of their marriage he was a military policeman stationed in Ft. Carson, CO and she was an elementary school teacher in Gillette, Wyoming.  She taught for 3 years at Northside Elementary and then in July of 1970 their first daughter, Danette Rene was born.  In 1972 they welcomed their second daughter, Denise Michelle.  In 1978, a year after building and moving into their home in Collins Heights, their son, Ryan David was born.  Shirley stayed at home to raise their kids but returned to the classroom full time in 1989 at Rozet School as a reading recovery specialist.  After that she taught second grade at Hillcrest and then first grade at Wagonwheel until she retired in 2006.  Shirley was a woman of her word who valued family, friendship, and a good laugh (usually after she scared you).  She and Dave spent every summer weekend  they could camping in the Big Horns – usually at the “old” Tie Hack, Middle Fork, or Circle Park.  Living in Gillette she was also never far from her Arvada roots and enjoyed going back there to spend holidays or celebrate birthdays.  Family celebrations were always important to Shirley and while she didn’t love cooking, she baked a lot of cakes and cookies. Maybe more than being a mom, Shirley love being a Grandma.  The past 25 years of her life were spent following her 5 grandkids around the state and nation for their various activities. Any given week you could find her at a baseball, soccer, football, basketball game or a swim meet supporting not only her own Grandkids but many others in the Gillette community.  She experienced each success and failure just as passionate as the athlete did.  She was even able cheer on her first great grandchild in his academic and athletic endeavors and would have loved to have done the same with her other two. On June 8, 2018, surrounded by family, Shirley lost her battle with cancer.  She is survived by her brother, Bobby (Gayla) Collins of Sheridan, WY; Janet (Gary) Hansen of Ethan, SD; 3 children:  Danette (Mike) Baldacci of Sheridan, WY, Denise (Matt) Hill of Loveland, CO, and Ryan (Billi) Bagwell of Gillette, WY; 5 grandchildren:  Tanner (Jade) Moser  of Gillette, WY; Skyler Moser of Ft. Benning, GA; Collin Baldacci of Casper, WY, Conner (Taylor) Baldacci of Laramie, WY, and Taylor Baldacci of Sheridan, WY; and 3 great grandchildren:  Jakob and Tirion Moser of Loveland, Co and Thea Moser of Gillette, WY.   Memorials and condolences may be sent in Shirley’s name in care of Gillette Memorial Chapel 210 West 5th Street, Gillette, WY 82716. Condolences may also be expressed at www.gillettememorialchapel.com

To order memorial trees or send flowers to the family in memory of Shirley Joyce Bagwell, please visit our flower store.