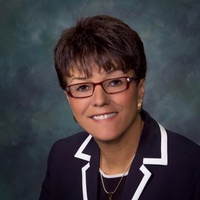 Mass of Christian Burial for Sherry Lynn McGrath, 68, will be Friday, October 26 at 10:00 am at St. Matthew’s Catholic Church in Gillette, Father Cliff Jacobson officiating; interment to follow at Mt. Pisgah Cemetery. Visitation will take place from 4:00 p.m. to 6:00 p.m., Thursday, October 25, 2018 at St. Matthew’s Catholic Church with Vigil to begin at 6:00 p.m. Sherry went to Heaven on October 22, 2018, after a struggle with ALS (Lou Gehrig’s disease) and Alzheimer’s. She was surrounded by her dear family. Sherry was the second of three children born to Howard and Eva Palmer on June 5, 1950, in Lead, South Dakota, and she graduated high school in 1968.  In September 1970, she married Ron McGrath.  A year later, they moved to Gillette, where they raised three kids, Jami, Josh, and Ashley. Sherry always had a true entrepreneurial spirit.  They owned and operated Drifter Ski and Sport. In 1981, she got her real estate license and went to work for Shirley Pettigrew at ERA Homestead Realty.  After a merger with Boardwalk Real Estate, she worked for Dick Rindels at ERA Boardwalk Real Estate until she purchased the office in 1987 where she owned, operated, and sold real estate.  In 2014, she sold the office to her son and retired from the business she loved in 2017. A few of Sherry’s business awards include the Kelly Swenson Business Person of the Year in 1999, Wyoming Association of Realtors, Realtor of the year in 2011, and was inducted into the ERA Real Estate National Hall of Fame in 2017. Sherry was a true champion of Gillette.  She never expected more than she was willing to give herself! There were very few boards in Gillette Sherry didn’t serve on. She was a past chair of the Chamber of Commerce, Economic Development, GARF, and gave countless volunteer hours and philanthropic support. Sherry had a true passion for education, especially Gillette College. She served as the Chairman of the Gillette College Advisory Board as well as the Foundation Board.  She often said continued education was not only important but essential for Gillette’s continued growth. Sherry was a driving force in the Gillette College Campus we have today. Besides her passion for Gillette, you would often find Sherry spending her free time watching her kids and grandkids play sports, dance, and other various activities.  She also loved her monthly bridge group and catching up with her friends. She loved traveling, seeing foreign countries, cruising the oceans, and spending time in the sun. Sherry is survived by her husband, Ron; children, Jami (Jeff Howe); Josh (Nachelle); and Ashley; grandchildren, Patrick Howe; Payton, Avery, and Reece McGrath; and Eva McGrath-Amegah all of Gillette; brother, Ralph Palmer (Glennis) of Lead, SD and many other loving family members and friends. She was preceded in death by her parents, Howard and Eva; and her brother, Tom. In lieu of flowers memorials may be made in Sherry’s name to benefit Gillette College and Close to Home Hospice Hospitality House. Memorials and condolences may also be sent in care of Gillette Memorial Chapel 210 West 5th Street, Gillette, WY 82716. Condolences may be expressed via internet at www.gillettememorialchapel.com

To order memorial trees or send flowers to the family in memory of Sherry Lynn McGrath, please visit our flower store.