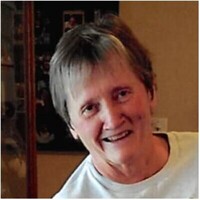 Memorial service for Sharon Schirado will be held at 2:00 p.m., Saturday, September 19, 2020 at Gillette Memorial Chapel with Erik Bergquist officiating. Sharon Schirado, 64 of Gillette, WY passed away Sunday Sept 13,2020 at home surrounded by her family of cancer. It is with our deepest sympathies and gratitude that we honor the life of our cherished Mother, Grandmother, Sister, Sister-in-law, Aunt, Cousin, and Friend. Her ever presence in our lives and the lives of everyone she touched, was her gift to us, a gift that we will cherish forever. Sharon Clark was born to Emit and Neva (Brown) Clark on December 28,1955 in Sidney NE. At an early age her family moved to Casper, WY where she was raised and educated. She enjoyed sewing, making tie blankets, aprons, playing bingo, going to auctions, and garage saling. Her biggest passion in life was her 7 beautiful granddaughters. On February 24,1973 Sharon married Larry Schirado in Casper, WY. In that union they were blessed with four children, Mindy, Melissa, Michael, Matthew (the 4 M’s). In 1976 they moved to Worland, WY where she worked at Maverik Country Store for many years, while raising her 4 M’s. In 1988 her husband had a job transfer, so they moved to Gillette, WY where she also transferred and worked at Maverik Country store and Hettinger Welding. At the time of her death she was employed as a cafeteria cook at Sage Valley for Campbell County School District. She enjoyed camping, grilling, and planting flowers in the summer, sewing in the winter and watching Criminal Minds, Golden Girls, and The Nanny. Family was a large part of her life. She was a big Eeyore fan with a collection that filled a room in her home. She took a trip to Disney World in 2017 and Nashville in 2019. She cherished her time spent with her family, especially her granddaughters. She will be forever missed. Sharon is survived by daughters, Mindy Bauer, Melissa McElwain, of Gillette, WY; sons, Michael Schirado of Denver, CO; Matthew (Lauren) Schirado of Gillette, WY; sisters, Wanda (Glen) Woodland of Henderson, NV; Sherrie (Mike) Bain of Dension TX; Phyllis Vega of Thermopolis, WY; half-brother, Jerry (Linda) Anderson of  Lincoln, NE; sisters-in-law, DeeAnn and Julie Schirado of Glen Ullin, ND; brother-in-law, Jerome Schirado and father-in-law, Mike Schirado of Glen Ullin, ND; seven granddaughters, Jennifer, Kaylee, Madison, Rian, Isabella, Brinley, Stella of Gillette, WY; her two lap dogs, Lilly and Jackson and her kitty, Lucy; several nieces, nephews, cousins, and lifelong friends.Sharon is preceded in death by her husband, Larry; brother, Bobby Clark; niece, Emerald Vega; son-in-law, Jeremy Bauer; brother-in-law, Jeff Schirado; mother-in-law, Gerry Schirado; parents and both sets of grandparents. Memorials and condolences can be sent to her family in care of Gillette Memorial Chapel 210 West 5th Street, Gillette, WY 82716. Condolences may also be expressed at www.gilettememorialchapel.com

To order memorial trees or send flowers to the family in memory of Sharon Van Sheila Schirado, please visit our flower store.