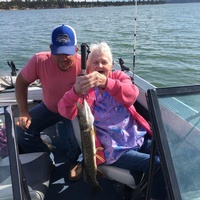 Sharon Chamberlain age 70, of Gillette, WY passed away on Wednesday, October 24, 2018 at Close to Home Hospice of natural causes. Sharon Rose (Benson) Chamberlain was born on August 14, 1948 in Sheridan, WY to Dell and May (Taylor) Benson. She grew up in many Wyoming and Montana towns. She worked as a waitress and after her children were born she stayed home to care for them. Sharon married Harvey Chamberlain on May 29, 1968 in Trego, MT. They raised their two sons, Jason and Tom. Sharon and Harvey enjoyed family time, and would take many trips to Spearfish and the Black Hills camping, four-wheeling and fishing. Sharon loved to cooking and large family gatherings. Christmas time was her special time to bake cookies and make candy with her granddaughter, DJ. Sharon is survived by her sons, Jason (Alicia) Chamberlain and Tom (Shellie) Chamberlain; and brother, Lenard Benson all of Gillette, WY; along with eleven grandchildren and three great-grandchildren. She was preceded in death by her husband, Harvey; parents, May and Dell Benson; and brothers, Dell and Tom. Memorials and condolences may be sent in care of Walker Funeral Home 410 Medical Arts Court, Gillette, WY 82716. Condolences may also be expressed at www.walkerfuneralgillette.com

To order memorial trees or send flowers to the family in memory of Sharon Rose Chamberlain, please visit our flower store.