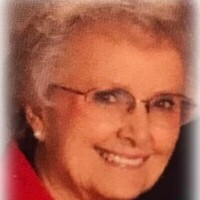 Memorial Services for Sallie Davis will be held at 2:00 p.m., Thursday, July 14, 2022 at High Plains Community Church with Rev. Tom Reynolds officiating. Sallie Ann Davis passed away peacefully on June 25, 2022 with her husband by her side.  She was born December 20, 1934 in Gillette to H.H. “Hank” Saunders and Margaret Rohan Saunders.

On December 27 1952, Sallie married her high school sweetheart, Robert Wayne Davis and they were blessed with four children.

Sallie was a talented piano player, playing for many weddings, funerals, accompanied students at musical festivals, and gave piano lessons.  She  started at an early age playing duets with a close friend, Louise Dickey, in competitions and just for pleasure.  Knitting, cross-stitching and keeping many photo albums of her family were more enjoyable pastimes.

She shared her many talents with the community serving on the Public Health Board, United Way Committee eventually the chairperson, Library Board including chairperson for four years.  Pioneer Manor benefited from her position on the Advisory Board and she delivered mail to the residents there. Meals on Wheels was another program she dedicated her time to for 25 years.

Sallie was a member of the Presbyterian Church, again serving as an Elder/Trustee, Deacon, teacher, and organist. In the late 1960's she served on a church committee that helped create what is today the Council of Community Services, the Soup Kitchen, and the Emergency Closet. She was a 54 year member of PEO,  holding all the offices  of Chapter V as well as being on  the State Board.  She also enjoyed being a member of Eastern Star.

Sallie was preceded in death by her parents and brother Bill.

In lieu of flowers, donations may be given to the Presbyterian Church,  Campbell County Public Library, Council of Community Services, Senior Center, Gillette Abuse Refuge Foundation (GARF) or a local charity of your choice. Memorials and condolences may be sent in care of Gillette Memorial Chapel 210 West 5th Street, Gillette, WY 82716. Condolences may also be expressed at www.gillettememorialchapel.com

To order memorial trees or send flowers to the family in memory of Sallie Ann Davis, please visit our flower store.