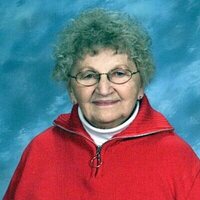 Funeral service for Sadie Astrid (Ojanen) Dockter will be at 11:00 a.m. Friday, August 28, 2020 at Trinity Lutheran Church with Pastor Jared Tucher officiating. Burial will be at a later date in Sunset Memorial Gardens in Bismarck, North Dakota. Visitation will be from 6-8 p.m. Thursday, August 27, 2020 at Walker Funeral Home.

Sadie Astrid (Ojanen) Dockter, age 92 passed away on August 17, 2020 at Shepherd of the Valley in Casper, Wyoming. She was born on January 17, 1928 to Walter John and Fannie A. (Antilla) Ojanen on a farm near Wing, North Dakota.  She was the oldest of five sisters and one brother.  She attended rural schools and graduated from Wing High School in 1945.  Sadie continued her education at Valley City State Teacher’s College and the Gillette campus.  Bookkeeping was her life’s vocation in North Dakota as well as Gillette, Wyoming.

After Sadie retired, volunteering became her life.  She was active in her church, Trinity Lutheran, Beta Sigma Phi and the community.  She was a girl scout and 4-H leader.  Sadie was the recipient of the “Ten Who Made a Difference” in 2003.  She also received the “International Award of Distinction” in Beta Sigma Phi.

Preceding her in death is her husband, parents, four sisters, one brother and one son. Survivors include her children, grandchildren and great-grandchildren.

In lieu of flowers a memorial has been established in Sadie’s name to benefit the Trinity Lutheran Loan Fund or the Boys Cottage at the YES House.  Memorials and condolences may be sent in care of Walker Funeral Home 410 Medical Arts Court, Gillette, WY  82716. Condolences may also be expressed via the internet at www.walkerfuneralgillette.com

To order memorial trees or send flowers to the family in memory of Sadie Astrid Dockter, please visit our flower store.