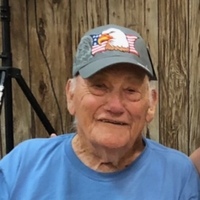 Funeral services with Military Honors for Roy E. Knutson, 98, of Gillette, will begin at 10:00 a.m., Tuesday, November 2, 2021, at the American Legion in Gillette.  Interment will follow at 3:00 p.m. in the Black Hills National Cemetery in Sturgis.  Visitation will be from 4-7 p.m. Monday, November 1, 2021 at Gillette Memorial Chapel.  Mr. Knutson died October 20, 2021 in Gillette. Roy Earle Knutson was born June 8, 1923 at the family homestead shack in Perkins County, South Dakota, the son of Carl and Ida (Nelson) Knutson.  He joined his siblings: Allen, Neil "Buster", Rose, with younger brother Andre coming along a bit later.  Roy was baptized in the Golden Valley Norwegian Church near his home.  Growing up on the family homestead on the south side of the Grand River in South Dakota was the beginning of many treasured memories.  He attended grade school at Johnson School in Perkins County and received his 8th grade education in Hettinger, North Dakota. Growing up in the depression, he talked about the dirty 30's, sharing many stories like how the surrounding communities which was made up of mostly cousins and many relatives, made it a ritual to make large batches of food and share around the community to make sure nothing went to waste. When he was 13, his family left Perkins and Harden Counties to move to Jenny Gulch, in the Black Hills of South Dakota.  He worked in a logging camp at Silver City for E.W. Miller for a while.  Then Uncle Sam said, "We Need You!".  Roy was inducted into the U.S Army at Fort Snelling, Minnesota and did Basic Training in Camp Maxey, Texas.  He spent nearly 2 years in the South Pacific primarily the Philippine Islands.  He was honorably discharged in 1946.  At the time of his death, he was one of the oldest living WWII Veterans in Campbell County. In 1948 he moved to Newcastle, Wyoming and started his oilfield career.  On July 10, 1948 Roy married the love of his life Lorene Sonne in Buffalo, Wyoming.  They made their home in Newcastle until 1968, all 4 children: Susie, Kevin, Butch and Jim were born during that time.  Roy moved his family to Gillette in 1968. Roy was a toolpusher for many years for various oil companies until 1974, at which time he bought his own drilling rig and started Hi-Time Drilling, his own company.   He drilled many water wells and many shallow oil wells throughout Northeast, Wyoming.  Hardworking, even after his retirement and selling his business in 1995, Roy stayed busy cutting and selling firewood and going to auctions. He loved hunting and fishing and especially valued his time at Tobin Lake, Saskatchewan, where he and Lorene owned a cabin for many years.  Roy was a great husband, dad and grandpa and a wonderful friend to many.  He will be missed by all who knew him. Roy is survived by sons: Kevin (Marcia), Butch (Debbie) and Jim all of Gillette; grandchildren: Jerry (Tanya) Hanson, John (Kim) Hanson, Nikki Knutson, Eric (Megan) Knutson, Kimberly (Shane) Goode, Kelly (Jason) Groene, Clint (Erin) Knutson and 17 great-grandchildren.  He was preceded in death by his beloved wife, Rene, daughter Susie, great-granddaughter, Korbi, his parents and all of his siblings. Memorials may be made to benefit the American Legion Post #42, where a memorial in his name has been established. Memorials and condolences may be sent in care of Gillette Memorial Chapel 210 West 5th Street, Gillette, WY 82716. Condolences may also be expressed at www.gillettememorialchapel.com

To order memorial trees or send flowers to the family in memory of Roy Earle Knutson, please visit our flower store.