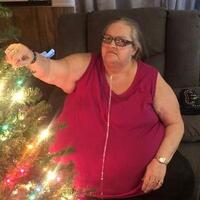 Memorial service for Rose Ewalt will be at 11:00 a.m. January 9, 2021 at the Walker Funeral Home with Kenna Rose officiating. Rose Mary Ewalt 61, went peacefully to heaven on December 26, 2020 at St Vincent’s in Billings, Montana. Rose was born on July 9, 1959 to Joseph J. and Rose F. (Hixon) Cassady in Union Town, PA. Rose moved to Butte, MT in 1964 where she attended school and met the love of her life, Pops (Clarence) Ewalt. They started their family in 1976 with their first son KJ (Kenny), their daughter, Stormy in 1978, their son, Bobby (Robert) in 1981 and their daughter, Kelly in 1982.  Rose and Clarence moved to Gillette, WY in the 80’s where they made their home and raised their kids.  After 27 years of living together they decided to tie the knot on May 12, 2003.  Through her years, Rose enjoyed many kinds of jobs, but her favorite was home health.  She enjoyed watching her “pearl” show and monkey show on Facebook. Rose also enjoyed all her grandchildren, great grandchildren, nieces and nephews.  In her spare time, she enjoyed camping, family gatherings, Christmas, shopping and Starbucks.  In October she finally got the dog of her dreams and enjoyed every minute she had with them. Jack Daniels and Posey Ray were the light of her life. Rose is survived by her husband, Clarence (Pops) Ewalt, her children, KJ, Stormy (Doug), Bobby (Cheyenne), Kelly (Brandon), her sister, Beaner (Raymond) and her brother, Jimmy along with numerous nieces and nephews, grandchildren and great grandchildren. She is preceded in death by her parents, her mother and father-in-law, 8 sisters, 5 brothers her son, Brandon and several nieces and nephews. A memorial has been established in Rose’s name to benefit Campbell County Home Health. Memorials and condolences may be sent in care of Walker Funeral Home 410 Medical Arts Court, Gillette, WY 82716.  Condolences may also be expressed at www.walkerfuneralgillette.com

To order memorial trees or send flowers to the family in memory of Rose Mary Ewalt, please visit our flower store.