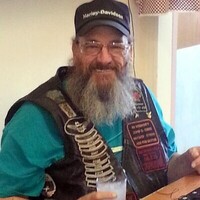 Memorial service for Ronald Willbanks will be held at 11:00 a.m., Friday, October 8, 2021 at First Assembly of God Church, 601 Carey Ave; inurnment to follow at Mt. Pisgah Cemetery.  Reception to follow at American Legion Post 42. Ronald J Willbanks passed away at Campbell County Health on the evening of Saturday September 25th, 2021 due to complications of Covid-19/pneumonia. Ron was born on April 29,1951 in Denver, CO and taken home by his loving parents Joseph and Ethel Willbanks of Colorado Springs, CO where he grew up and attended Mitchell High School. Ron married the love of his life Sharon Darlene Wagoner in Tucson, AZ and they had two boys Ronald Jr. (Ronnie) and Jason. The family moved to Gillette, WY in 1978 where Ron was already working for Cobre Tire out at the two AMAX Coal properties Belle Ayr and Eagle Butte Mine as a Tire man.  In the mid 90's Ron changed his career and drove for numerous crew transport companies in Gillette transporting BNSF train crews where he made numerous lifelong friendships in the process.  In 2005 Ron was hired on and went to work for BNSF as a conductor until he retired in August of 2021.  During his time in working Ron has gathered a plethora of extended family who shared in the interests that Ron had including Riding Motorcycles to planning Poker Runs, tinkering on his numerous golf carts and just hanging out with invaluable friends (their spouses) and neighbors. Ron is survived by his two sons Ronnie and Jason of Gillette; four grandchildren Kassidy Faith of Gillette; Atiyanna Flores of Washington; Trey Allen of Gillette; and Ivy Darlene of Belle Fourche, SD; sister Patrice (Ed) Wullschleger of Longmont, CO; brother-in-law Walter (Kay) Bell of Colorado Springs, CO; and numerous nieces and nephews spanning the region from Morrison, CO, Colorado Springs, CO, Woodland Park, CO, Cripple Creek, CO, and even California. Ron is preceded in death by his parents, Joseph and Ethel Willbanks; wife, Sharon Darlene Willbanks; sister, Sandra Willbanks; and nieces Dawn Bell and Kimberly Macklin. Memorials and condolences may be sent in care of Gillette Memorial Chapel 210 West 5th Street, Gillette, WY 82716. Condolences may also be expressed at www.gilettememorialchapel.com

To order memorial trees or send flowers to the family in memory of Ronald Joseph Willbanks Sr., please visit our flower store.