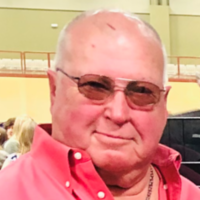 Roger Michael Mallak, 76, of Gillette, died Sunday, Sept. 26, 2021. Roger was born May 1, 1945, in St. Cloud, Minnesota, the son of Michael and Frances (Blazeski) Mallak. He was raised and educated in St. Cloud. After graduation from high school, Roger joined the Navy, where he served on a submarine. It was during his time on the submarine that he learned the printing trade. After his honorable discharge he returned to Minnesota and worked for Penny Printing in Minneapolis. In the mid-seventies, Roger came to Wyoming with his family. They briefly resided in Sheridan before making their home in Gillette. Here in Gillette, Roger owned and operated Zip Printing while working at Jacob’s Ranch and then Black Thunder, where Roger was currently employed and looking forward to retirement next year. Roger enjoyed watching monster trucks and rodeos, spending time in the mountains and was a huge movie buff. Roger will be remembered most as hardworking with strong work ethic and for his big heart inside his gruff personality.He will be missed by his wife Vickie Mallak; children: Troy (Lori) Mallak, Melissa Beasly, Toni (Bill) Bradley, all of Gillette, Tana Kimber of Casper and Todd Mallak of Colorado Springs, Jason Rokowski of Casper, Jessica (Chris) Larkins of Denver; several grandchildren and great-grandchildren; siblings: Bernard (Mary Anne) Mallak of Little Falls, Minnesota, Irene (Tom) Hudek of Maple Lake, Minnesota, Rose (Ron) Ranweiler of Johns Island, South Carolina, Sylvester (Betty) Mallak, Rita (Gene) Barrett and Jan (Ron) Baert, all of St. Cloud, Minnesota; and numerous nieces and nephews. Roger was preceded in death by his parents; son, Phillip; son-in-law, David Jackson; grandson, David Knigge; great-grandson, Chrome; brother-in-law, Roger Niedzielski; nephew, Steven; and great-nephew, Daniel. A memorial service will take place at a later date. Please check walkerfuneralgillette.com for updates and to share your condolences and memories. Memorials and condolences may be sent in care of Walker Funeral Home, 410 Medical Arts Court, Gillette, WY 82716

To order memorial trees or send flowers to the family in memory of Roger Michael Mallak, please visit our flower store.