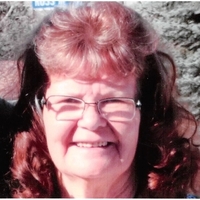 Memorial service for Roberta “Berta” Tafel will be held at 1p.m., Friday, March 13, 2020 at Gillette Memorial Chapel with Pastor Paul Baughman officiating; a gathering of family and friends will be held one hour prior to the service also at Gillette Memorial Chapel. Roberta Gail Tafel age 69, passed away on Friday, March 6, 2020 at Wyoming Medical Center, Casper, WY. On September 27, 1950 Berta was born to Bill and Furne LeClair. Legend says she was small at birth and slept in a dresser drawer. In school she was in synchronized swimming and loved it. Even a few years ago in the city pool she was doing that floating and lift one leg straight up thing. Berta was a car hop during high school at A&W restaurant earning enough money to buy herself a car; so she could be a little independent and to prepare herself to leave home. In a previous marriage Berta was blessed with sons; Edward Lambert II and Anthony Lambert, she then began her devotion to her family. A few years later she met J.C. and they added to the family a daughter, November and a son, Elliott. Berta graduated from Flint Barber College and began her 31-year career as a Barber/Hairstylist. She enjoyed sports and helped coach her sons in T-ball and softball, supported them in wrestling and karate. Berta played softball and was the perfect teammate never being negative and played for the fun and camaraderie, spending time and enjoying being with others. Bowling was another interest. She and her sister Karryn were on a team for years, also she was on a team with J.C., where her only goal was to have a higher score than J.C.! Berta loved her Calvert Park Church family she was a person that was counted on to do just about anything with the children or pitch in when anyone needed help. She enjoyed doing creative things: scrap booking, jewelry design, painting, and drawing. Berta retired and she and J.C. moved to Gillette to be close to her sons and precious grandchildren which were the lights of her life. Berta is survived by husband, J.C. Tafel whom she was married to for 37 years; her children, Ed Lambert II and wife Kim; Anthony Lambert and wife Hannah; and Elliott Tafel; grandchildren, Ashleigh; Emery; Egan; Eddison; and Asher and great-grandson, Carter; sisters, Karryn Lopez and husband Frank; Daneata Zarko; mother-in-law, Carol Tafel; brother-in-law, Larry Tafel and wife Cathy; sisters-in-law, Penney LeClair; Deborah LeClair and Kay Tafel, and many nieces and nephews. She joins in heaven with her parents, daughter, November; brothers, Larry and Philip LeClair; nephews, Nicholas Lopez and Jordan Kane; brother-in-law, Tom Zarko and father-in-law, John L. Tafel. In lieu of flowers the family request that memorials be made in Berta’s name to benefit The Barbara Davis Center for Childhood Diabetes; www.barbaradaviscenter.org. Memorials and condolences may be sent in care of Gillette Memorial Chapel 210 West 5th Street, Gillette, WY 82716. Condolences may also be expressed at www.gillettememorialchapel.com

To order memorial trees or send flowers to the family in memory of Roberta Gail Tafel, please visit our flower store.