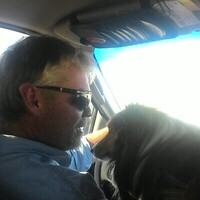 Graveside service for Robert Wagner, 56, of Gillette, will be at 1:00 p.m., Friday, December 3, 2021 at Mt. Pisgah Cemetery. Robert passed away November 23, 2021 at Wyoming Medical Center, Casper, WY from injuries of an auto accident. Robert was born July 2, 1965 in Peoria, IL. He was raised and educated in East Peoria, IL and graduated from Beckville High School in Texas. Robert moved to Gillette, WY over 30 years ago and was employed at Pacific Steel for 20 years until 2019. Robert enjoyed anything to do with the outdoors, he just loved being outside; especially fishing, listening to all kinds of music, and taking walks with his two dogs; they were the love of his life. He named them Boy and Girl. He is survived by his son, Shawn Wagner of Washington; his mother, Carla (Chester) Parks of Texas; sister, Sherry (John) Noe of Texas; and sister, Shelly (Galen) Coleman of Texas; four nephews and two nieces; aunt, Judith Marquis of Florida. He is preceded in death by grandparents, Harold and Jean Marquis. Memorials and condolences may be sent in care of Gillette Memorial Chapel 210 West 5th Street, Gillette, WY 82716. Condolences may also be expressed at www.gillettememorialchapel.com

To order memorial trees or send flowers to the family in memory of Robert Wagner Jr., please visit our flower store.