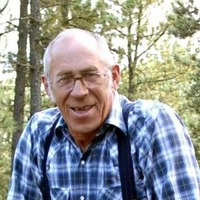 Robert “Bob” Rothleutner, 86, of Gillette passed away Monday, December. 14, 2020 at Legacy Living and Rehabilitation Center in Gillette from complications of Covid-19. Mass of Christian burial begins at 11 a.m. Friday, December 18 at St. Mathew’s Catholic Church with the Rev. Cliff Jacobson officiating.Burial will follow the funeral service at Mount Pisgah Cemetery. Visitation will take place at Walker Funeral Home. Family visitation will be Thursday December 17, 2020 from 3-4 p.m. Public visitation will be from 4-6 p.m. with a Rosary beginning at 6 p.m. Bob was born January 17, 1934, in Douglas, WY to Frank and Clara Rothleutner. He was one of 13 siblings. Bob met Eddie Brown at a dance at the Skunk Hollow 4-H Dance Hall in Newcastle, and they were married March 7, 1959. They had five children, three boys and two girls. Their first daughter Connie passed away shortly after birth. The family spent its early years on the Rothleutner family ranch at Dull Center in Converse County. Eventually they moved to Gillette, where they raised their four children. After settling in Gillette, Bob worked as a mechanic doing front-end alignments. He also spent many years working in the oilfield. After leaving the industrial field, he did building maintenance for many years, most notably for the Catholic Church. Bob was a Jack-of-all-Trades and there was nothing he could not fix. He enjoyed hunting, fishing, gardening and anything that involved working with his hands. Bob loved to pass down his knowledge to his children and grandchildren and teach them lessons he believed to be important. He had a deep faith in God and was an active member of St. Mathews Catholic Church. Bob is survived by 7 siblings, John, Fred, Hattie, Barbara, Teresa, Joann, Mary Jo; sons, Dan Rothleutner, Jerry (Tammy) Rothleutner and Ken (Carol) Rothleutner; daughter, Pennie (Kim) Markadakis; grandchildren, Jay and Eric Rothleutner, Emily Kennedy, Annie Molder, Julie Fickel, Jimmy Rothleutner and Connie Hamel and Luke Vanberkom; 20 great-grandchildren; and numerous nieces and nephews. Bob was preceded in death by his wife Eddie, infant daughter, Connie; parents, Frank and Clara; siblings Frank, Dave, Leo, Bill, Carolyn and granddaughter, Grace, Memorials and condolences may be sent in Robert’s name in care of Walker Funeral Home, 410 Medical Arts Court, Gillette, WY 83716, condolences may also be made online at walkerfuneralgillette.com.
To order memorial trees or send flowers to the family in memory of Robert Joseph Rothleutner, please visit our flower store.