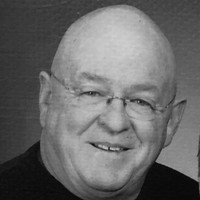 Mass of Christin Burial for Robert Palmer will be held at St. Mathews Catholic Church in Gillette, Wyoming on Monday, December 9,2019 at 11:00 a.m., Father Cliff Jacobson officiating.  Robert V. Palmer Jr. of Gillette, Wyoming passed away November 15, 2019 at the age of 74.

Robert (Bob) the oldest of 7 children was born December 1, 1944 in St. Louis, Missouri. Bob moved to San Diego, California with his family in 1953 where he attended Saint Augustine High School.  Before graduating in 1962 he met Katherine Bowman, his future wife. They married January 25, 1963 at Immaculate Conception Catholic Church and were married for nearly 56 years. They started their own family before moving to Gillette, Wyoming in February of 1976.

Bob balanced work as a sheet metal journeyman with family and a love of sports.  He played competitive softball for years in Gillette before moving on to coaching.  Bob coached different sports but found a true passion for the game of baseball. (He loved his Padres.) His contributions to Gillette baseball programs at all levels helped to grow and enhance programs that are still benefiting the youth of Gillette today. His later years found him teaching catechism, playing Santa Clause and being “Papa Bob” to many.

Bob is survived by his wife, Katie; his children, Peter, Mathew, Andrew and Roberta, 11 grandchildren and 8 great-grandchildren. In lieu of flowers, it was Bobs' wish to have donations made to Saint Augustine High School in San Diego, California. Memorials and condolences may be sent in care of Gillette Memorial Chapel 210 West 5th Street, Gillette, WY 82716. Condolences may also be expressed at www.gillettememorialchapel.com

To order memorial trees or send flowers to the family in memory of Robert Victor Palmer, please visit our flower store.