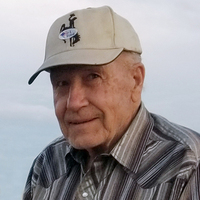 Robert Perry Geer, 88, went peacefully to be with his Lord on July 15, 2021. He was born January 23, 1933, in Powell, WY, to parents Marian Inez (Kobe) and Perry Clifford Geer. Bob, as he was known to family and friends, was raised in Campbell County where he attended the Bundy Elementary School and then graduated from Campbell County High School in 1951. On February 17, 1952, he married Mildred Joan Percifield. In his early years he worked a variety of jobs that caused them to move from the Hoe Creek home to town several times. He volunteered to construct a community trunk telephone line, drove truck hauling livestock and cow cake, drove a water truck for his father-in-law, constructed buildings for a contractor, surveyed for the Uranium boom after WWII, and partnered with his parents on the ranch. In 1955 Bob started his 33-year career with the Wyoming Highway Department. He gave credit to these jobs for the knowledge that has helped him and his family through life. During these years Bob and Joan were blessed with three children: David, Darel, and Roberta. After raising their children, they were able to enjoy retirement together by traveling across the country, visiting historical sites in Wyoming, and many locations where the Wyoming Cowboys played football. Bob had a passion for the past and enjoyed restoring antiques to their old glory. In the last decade he has restored all but 3 of Wyoming’s license plates and was excited to find his birth year plate within his last week of life. In his youth, he was an artist with a pencil, paint, and many musical instruments. He enjoyed ranch life with his “city girl” and was happy to be in a tractor, whether he was summer fallowing or raking hay. Bob faced his largest obstacle in 2019 when his wife of 67 years went to be with the Lord. As his heart was healing, he continued to attend their beloved Sunday school class where he enjoyed worshiping, seeing his friends, and singing to the class. He continued to enjoy his family gatherings and telling stories of his past. While telling stories this past week he paused to say… “I have had a good long life.” Robert is survived by his sons David (Diana Wilsey) Geer of Cheyenne, WY, and Darel (Beryl) Geer of Savageton, WY; son-in-law, Rick Douglas of Moura, Queensland, Australia; brother Kenneth Geer of Gillette. Surviving grandchildren are Sean (Vicki) Geer and Dani (Brian) Harmeyer both of Douglas, WY; Lex (Amanda) Geer of Savageton, WY; and Andy Anderson (Lindsay Serfazo) of Joliet, MT. Bob has seven surviving great-grandchildren and numerous nieces, nephews, and cousins. Preceding him in death were his parents, two infant sisters, his beloved wife Joan and daughter, Roberta Douglas. The family is honoring his wishes by having an immediate family graveside service. A memorial is being established and can be sent to: 60 Savageton Rd, Gillette, WY 82718.

To order memorial trees or send flowers to the family in memory of Robert Perry Geer, please visit our flower store.