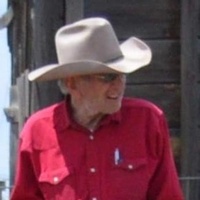 Funeral service for Robert L. Dillinger will be at 10 a.m. Thursday, May 16, 2019 at the First Presbyterian Church in Gillette, WY with Pastor Clint Pickrel officiating with burial to follow in Mt. Pisgah Cemetery. A luncheon to follow at Ruff’s Bar in Rozet, WY. Visitation will be from 4-7 p.m. Wednesday, May 15, 2019 at Walker Funeral Home. Robert Lee Dillinger, age 87 passed away on May 11, 2019 at Close to Home Hospice in Gillette, Wyoming of natural causes. Robert Lee Dillinger was born on May 19, 1931 to Jacob and Della (Coffee) Dillinger in Dillinger, WY. Bob did his many chores at his parents homestead and worked the horses with his brothers. As a young man he worked for the Gillette Sale Barn for numerous years. Bob attended Gillette Schools and graduated from high school in 1949 and went to full-time ranching with his mother, Della. They had a ranch full of Hereford cattle and later started to raise Quarter horses. In 1960 Bob married Claralee Fox and they continued to ranch on the home place which they purchased from Della. They had two daughters, Phoebe and Carrie. Both Bob and Claralee have been active members of Farm Bureau in Campbell County. Bob served as president of the Campbell County Farm Bureau several times. Through the years of marriage, Bob and Claralee have shared their love for the horses they raise and the cattle they have had. The in 1953 Bob took over the weather observation with National Weather Service; continuing on until he was no longer able to, but it continues on with the family. Bob is survived by his wife, Claralee; two daughters, Phoebe (David) Anderson; Carrie (Tim) Allison, one granddaughter, Fillie (Anthony) Gibson; three great-grandchildren, Ceinya, Kadynce and Adam, several nieces and nephews. He was preceded in death by his parents, three brothers, Earl, Jay and Bill, two sisters, Margaret and Inez and step-father, Bob Bratton. Memorials and condolences may be sent in Bob’s name to Walker Funeral Home 410 Medical Arts Ct Gillette, WY 82716. Condolences may also be expressed at www.walkerfuneralgillette.com

To order memorial trees or send flowers to the family in memory of Robert Lee Dillinger, please visit our flower store.