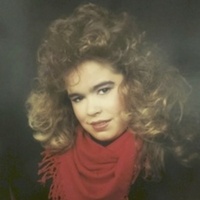 Riqui Lynette Smith passed away, surrounded by loved ones, on Apr 11, 2020, at Close to Home Hospice.  Riqui was born on Aug 18th, 1972, in Gillette, Wyoming and spent her early years with her mother and sister in Billings, Montana.  They moved to Edgemont, South Dakota where Sharon met Greg and married him in 1977.  In 1979, the family moved to Gillette, Wyoming where Riqui and Tammy loved being near their maternal grandmother, Arvella Beckley.  Riqui graduated in 1990, from Campbell County High School where she enjoyed choir, drama club and participating in the school plays.  She moved to Billings in 1994, to further her education in music and the arts.  On April 9, 1996, she was stricken with Viral Encephalitis and had remained in an Encephalopathic Coma since then.  Riqui loved life and everything about it.  She was positive, silly, carefree, loved to sing and she enjoyed being around small children.  She often would pile all the neighborhood kids into her car and go to Dairy Queen or McDonalds.  Her specialty was helping her sister make the Annual Good Egg party a success.  Riqui was blessed to have shared her last 6 years with her adoptive caregiver family, John and Terri Luceras along with daughters Morgan, Aurora, Riley and especially, LaToya.  Riqui went to the Rockies games, camping and boating at the lake, dance recitals, every birthday party and even a Las Vegas vacation with the family! She was always treated and even introduced as one of their girls.  Riqui was a special soul and she enriched and touched everyone who met her.  Riqui is survived by her parents, Greg and Sharon Heseltine, a sister Tammy (John) Spry, two nephews, Nathan (Mackenzie) Barrett and Army Cavalry Scout Samuel Spry.  Her half-sister Annette (James) Taribini, stepsister Holly (Rob) Larimore and stepbrother Greg also survive her.  Her biological father, Richard LeRoy Fisher, preceded Riqui in death. A memorial service will be held at a later date. Memorials and condolences may be sent in care of Gillette Memorial Chapel 210 West 5th Street, Gillette, WY 82716. Condolences may also be expressed at www.gillettememorialchapel.com

To order memorial trees or send flowers to the family in memory of Riqui Lynette Smith, please visit our flower store.