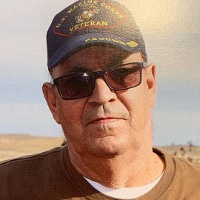 Richard A. (Stoney) Stone, age 70, of Rozet, WY passed away Thursday, August 15th, 2019 at home, surrounded by his family.  Graveside services will be Tuesday, August 20, 2019, at 11:00am at the Rozet Cemetery. He was born March 11, 1949 in Malone, NY to Bernard and Dorothy Stone.  He graduated from school at Salmon River Central High School and then enlisted in the US Marine Corp 1967-1969.  After his enlistment, he moved to Wyoming where he started a long career in the oil and gas business.  He worked for several oil companies throughout WY, but his heart was with True Oil Company-Belle Fourche Pipeline where he was employed for over 20 years retiring in 2008.  He was a member of the VFW in Moorcroft, WY. In January 1988, he married “his bride” Linda Smith in Rozet, WY.  Together they had sons Tony Stone, Robert Burke, Tim Burke, Richard Stone, Christopher Stone and daughter, Courtney Stone. Dick’s passions were hunting, fishing, wood working, and spending time with his many friends and family. Many social events were held in his garage where friends and family gathered for any occasion. His hunting trips/ camps for deer and elk were legendary. Local friends and hunters from many states often left with memories of life time. He is survived by his wife, Linda; children Tony (Kim) Stone; Robert (Shanille) Burke; Tim (April) Burke; Richard (Eva) Stone and Christopher Stone and 12 grandchildren. Richard is preceded in death by his parents and daughter, Courtney Stone. In lieu of flowers, donations may be made to Heptner Cancer Center in Gillette, WY. Memorials and condolences may be sent in care of Walker Funeral Home 410 Medical Arts Court, Gillette, WY 82716. Condolences may also be expressed at www.walkerfuneralgillette.com

To order memorial trees or send flowers to the family in memory of Richard Arthur Stone, please visit our flower store.