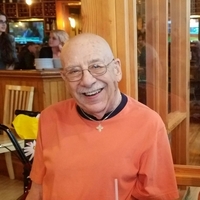 Richard Emmett Shober, aka “Pappa”, 96, died peacefully in his home 12/14/2020. Richard was born in his family’s ranch home on 4/16/1924. After serving in the Army during World War II, Richard came home to meet and marry his sweetheart Rosemary with whom he celebrated 64 years of marriage. Pappa is proceeded in death by his parents, all 4 of his siblings and 2 sons. He is survived by his wife Rosemary, son Jeff and his wife Deb, daughter Beth and her husband Marty and his grandchildren Rachel, Sam, and Jackson. Richard was a lover of gardening and found most peace digging in the Wyoming dirt. He also enjoyed dancing, and spending time with his family. He was a kindhearted man and never met a piece of pie he did not enjoy. Services will be conducted at a later date.
To order memorial trees or send flowers to the family in memory of Richard Emmett Shober, please visit our flower store.