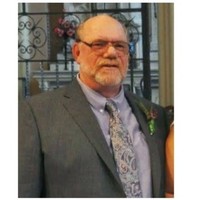 He is survived by his wife of 37 years, Sandi (Cooper) Gilkey of Gillette; one daughter, Misti (Zachary) Swanson of Kronenwetter, WI; two grandchildren, Arleigh and Emerson Swanson; two brothers, Jerry Gilkey of Smithwick, SD and Tom Gilkey of Rock Springs, WY; two nephews and one niece; several close friends and his railroad family. Richard was preceded in death by his parents, Roy and Helen Gilkey. Richard graduated high school from Edgemont, SD in 1970 and briefly attended Black Hills State College. He worked in the oil field for a short time before starting his work with Burlington Northern railroad in 1972. He worked for the railroad for 40 years before retiring in 2012. After his retirement he enjoyed his time with friends and family, visiting his daughter and grandchildren, and working on projects around his home. Richard had a generous and giving spirit and was known for helping out anyone in need. He made it a point to be there to support his family and friends regardless of the time, cost, or even travel needed and never expected anything in return. At Richard’s request, no services will be held, and his ashes will be spread at a later date in a private ceremony with his family. Should friends desire, donations can be made to any local animal shelter. Memorials and condolences may be sent in care of Gillette Memorial Chapel 210 West 5th Street, Gillette, WY 82716. Condolences may also be expressed at www.gillettememorialchapel.com

To order memorial trees or send flowers to the family in memory of Richard Lee Gilkey, please visit our flower store.