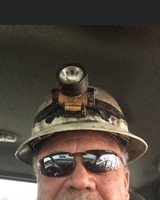 Richard Boyd, age 57, passed away on August 29, 2022 at hs him. Richard was born in Sheridan, WY to Francis Boyd and Marjorie Ewoldson. He moved with his family to Gillette, where he graduated from high school in 1984. After graduation he went straight to work. Working as a track hoe operator for almost 30 years. Richard married Stephanie Meckem, together they had 2 sons Brian and Michael. The couple later divorced. Richard was an avid outdoorsman and especially loved time spent in the Big Horn Mountains. Enjoyed sports and football. He followed the Kansas City Chiefs and the Denver Broncos. Loved watching all things John Wayne and if not tuning into a classic western it would be the military channel. Richard will be missed by his sons: Brian Boyd and his wife Aimee of Cheyenne and Michael Boyd of Gillette; brothers: Pat(Lisa) Boyd, Kelly (Cindy) Boyd and Zane Boyd; sister, Peggy Boyd; nephew, Stephen Boyd. He was preceded in death by his parents; sister, Pam Melvin. Internment in the Dayton, Wyoming Cemetery and private family services will be at a later date. Memorials may be sent in care of Gillette Memorial Chapel 210 West 5th Street, Gillette, WY 82716.

To order memorial trees or send flowers to the family in memory of Richard Roy Boyd, please visit our flower store.