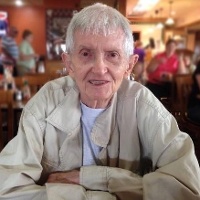 Funeral service for Rhyllis Rae Oedekoven will be at 11 am Friday, May 31, 2019 at the Prince of Peace Lutheran Church in Gillette, Wyoming with Pastor Deb Cote’ and Reverend Lin Davenport officiating. After a fellowship time, burial will be at the Mt. Pisgah Cemetery in Gillette. Rhyllis Rae passed away on May 26, 2019 at the Legacy Living and Rehabilitation Center in Gillette of natural causes. She was 91 years old. Rhyllis Rae was born on May 25, 1928 to Mark G. and Bernice (Orton) Richmond in Denver, Colorado when her father and mother were taking classes for continuing education. She grew up in Spearfish, South Dakota where her mom and dad taught at Black Hills Teachers College. After graduation from Spearfish High School in 1946, Rhyllis Rae attended Black Hills Teachers College and earned a Bachelor of Science degree in Physical Science. Her father was her chemistry teacher and her mother her music teacher. During a short period of working in industry in Delaware, Rhyllis Rae discovered her love of books and subsequently enrolled in the University of Denver School of Librarianship, earning a Master’s degree in Library Science. Her first librarian position followed at the George Amos Memorial Library in Gillette. She later earned Bachelor of Arts degrees in both Music and Education, which she applied towards her work in music education in rural schools. She met and married Charles R. Oedekoven in 1951, and they had three children: Byron, Isora, and Olin. Rhyllis Rae lived on a ranch in northern Wyoming until she divorced and returned to Spearfish in 1969 where she became active her home community and taking care of her aging parents. She was a Past Matron in the Order of Eastern Star. Rhyllis Rae was a member of P.E.O., Daughters of the American Revolution, and the Mayflower Society. She was an active member in the churches she belonged to: singing in the church choir, teaching music, and participating in bible study including completing and later help in teaching Cursillo. In 1993, Rhyllis Rae moved back to Gillette to be near her sons. She became a member of the Holy Trinity Episcopal Church and an associate member of Prince of Peace Lutheran Church where she regularly performed special music during the Advent and Lenten seasons. Rhyllis Rae was a member of P.E.O. Chapter V and participated with many Masonic activities in Gillette.  Her passions related to books, archeology, music, and cats. Over the course of her career, she worked at libraries in South Dakota and Wyoming. Her love of archeology took her to Mexico, Europe, Peru, Ecuador, and Bolivia where she explored and studied the wonders of the ancient world. Rhyllis Rae sang in several choirs, taught music to children, played percussion in the Power River Symphony, and played her beloved marimba at churches for over 60 years. She was also a devoted lap for her cats. Rhyllis Rae is survived by her children, Byron F. Oedekoven of Gillette Wyoming, Isora C. (Jeffrey) Heckel of Woodbridge Virginia, and Olin O. Oedekoven (Laurel Vicklund) of Gillette; grandchildren, Genevieve M. Heckel (Fernando Herrera) and Valerie R. Heckel; and great- grandchild, Catalina Rae Herrera Heckel. She was preceded in death by her parents. A memorial has been established in her name to benefit P.E.O. and the Order of Eastern Star. Memorials and condolences may be sent in care of Walker Funeral Home 410 Medical Arts Court, Gillette, WY 82716. Condolences may also be expressed at www.walkerfuneralgillette.com

To order memorial trees or send flowers to the family in memory of Rhyllis Rae Oedekoven, please visit our flower store.