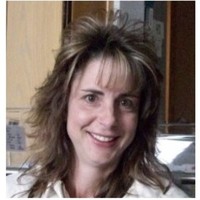 Retta-Louise Ruth (Rush) Johnsen, 46, passed away Wednesday, January 8, 2020 from an accidental fall at her home. Born September 12, 1973 in Havre, MT, she was the daughter of Dennis and Margo (Yonkee) Rush. She grew up with three ornery older brothers teasing her and protecting her. She enjoyed spending time every summer with her cousins, aunt, grandma and great-grandma in Thermopolis, WY. She enjoyed playing volleyball throughout her time attending Malta High School. Retta was full of life with a radiant smile on her face. After high school she attended Sheridan College in Sheridan, WY for one year, then transferred to Montana State University in Bozeman, MT. In 1994, she married her high school sweetheart Richard and gave birth to their daughter Shelby Jordyn. Retta finished her Associates Degree in Medical Secretary in Helena, MT before they moved their family to Gillette, WY. In 1999 their second child was born, Lance Richard. Retta adored her children and stayed at home with them as they grew up. After Retta and Richard’s divorce she continued to live in Gillette. She dated LN Wagner up until her death. They made a good team and took good care of each other. Retta is survived by her children, Shelby Jordyn Johnsen of Bozeman, MT, and Lance Richard Johnsen of Laramie, WY; her parents Dennis and Margo Rush of Malta, MT; brothers Damon (Kaye) Rush of Pocatello, ID, Darvin Rush of Missoula, MT, and Jordan (Jenny) Rush of Rozet, WY. She was welcomed to heaven by her great-grandmothers Clare Retta Axtell and Ruth Brooks Yonkee, and grandmothers Ellen Louise Hobson and Ruth Clare Johnson. Funeral services will be held Wednesday, January 22, 11:00 am, at the Little White Church in Malta, MT. Memorials and condolences may be sent in care of Walker Funeral Home 410 Medical Arts Court, Gillette, WY 82716. Condolences may also be expressed at www.walkerfuneralgillette.com

To order memorial trees or send flowers to the family in memory of Retta-Louise Ruth Johnsen, please visit our flower store.