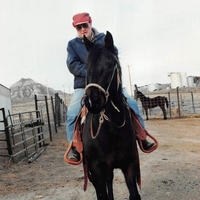 Funeral service for Raymond Record will be held at 2:00 p.m., Friday, April 9, 2021 at Gillette Memorial Chapel with Pastor Ernie Bishop officiating; interment to follow at Pleasant Valley Cemetery. Visitation will take place from 4:00 p.m. to 7:00 p.m., Thursday, April 8, 2021 at Gillette Memorial Chapel. Raymond “Red” William Record was born August 24, 1935 in Sundance, WY to Clarence O. and Mabel (Brown) Record.  He was born premature  His parents kept him in a shoe box in  the stove, then he caught pneumonia and the doctors told his parents that they did not expect him to live through the night, but he did and that built him to be tough enough to survive his life.  Because of this it showed his grit from the beginning.  His parents had the HK ranch on Inyan Kara and that is where he fell in love with the country life, his favorite part of living in this area. They moved to Moorcroft when he started school, he hated living in town, something that never changed. At a young age he took up American Legion boxing, he played football through grade school and lettered in Football as a Gillette Camel.  He was also very active in FFA.  He spent all his weekends and summers working on ranches.  He liked to rodeo and went to the National Finals in 1955.  He qualified in saddle Bronc, bareback and bull riding; the state finals were held in Saratoga the finals in Harrison, Nebraska.  He always wanted to have his own ranch someday, and worked every hard to make that dream a reality.  He loved to go fishing in the mountains where he fly fished off his horse; we believe that was his 2nd greatest passion. He met the love of his life, Phyllis Gay (Johnson) Record, at a dance at the American Legion in Gillette in 1955.  They were married a year later and were married until her passing in 2018. They lived at the Bigerstaff Place when they were first married and then moved back to Inyan Kara for a short time. Red worked at Wyodak for 20 years and on nights and weekends he worked on and ran cows on various ranches in the area. Including the American Ranch, “Toots” Marquiss place, Jean Halladay and with Frank Svalina. There were 3 kids born to this union, Robert “Bob” William (Darlene), Lynda Jean Berckefeldt (Lonny) and Paul Clay (Lori). Red and Phyllis finally purchased the ranch of their dreams, with all obstacles stacked against them, Raymond Don Saunders believed in their dream and backed them.  That was the start they needed to become successful ranchers and build the future for their children.  Having that ranch was the most important thing in his life other than his wife and family.  In the last few years even when he could not physically go out and work, in his mind he was feeding cows and riding horses and spending time with his wife. He is survived by his three children, 12 Grandchildren and 15 Great Grandchildren with a set of twins on the way. His brother Jerry Record of South Dakota and their 4 children, Don and Dalyce Record of Montana and his sister Beverly (Bill) McClung and 3 children of Arizona and Sister in law Marvis Record of Story. He was preceded in death by his parents, brothers Jim and Joe Record and sister in law Joan Record. The family would like to express their gratitude to Andrea George for the wonderful care that she took of what quickly became her best friend for the last six and a half years.  Without her care he would not have been able to stay home till the end, which he always wanted to do.  Memorials may be made in Raymond's name to benefit the Heptner Cancer Center. Memorials and condolences may be sent in care of Gillette Memorial Chapel 210 West 5th Street, Gillette, WY 82716. Condolences may also be expressed at www.gillettememorialchapel.com

To order memorial trees or send flowers to the family in memory of Raymond William Record, please visit our flower store.